The Highgate vampire case is spread across a wide variety of media. Newspapers, magazines, journals, books, TV, radio—you name it, it's been there. Until recently, one particular oblique source has eluded me: an American magazine.

This oblique source is surprisingly pivotal to our story, as David Farrant's contribution to it would come back to haunt him at a later time. In an interview with associate, Rob Milne, he mentions: 'I got approached by an American magazine ... they'd heard about the the stories of vampirism (this was obviously before my trial at the Old Bailey) and they were doing an article on Satanism, Highgate Cemetery being used by Satanists, nudity, exorcism ...

DF Yes. And bear in mind, this was time all of this stuff was all over magazines, the News of the World - there was really a great interest.

RM I remember that at the time. It was every other week there was an exposé of some Satanic group or some 'black magic outrage' and all that sort of thing ...

DF Well, ironically, I ended up getting - not exposed - but blamed for that.

DF Foing back. Because what I did was, I knew that this reporter wanted a picture. I [sic] was a big American magazine and I thought, well, there's no problem, its [sic] not England and, you know, they promised quite a good payment for it.

DF I took the girl [Martine de Sacy] into Highgate Cemetery one night, and I got her to pose named in front of these black magic symbols that we'd found. I took two or three pictures ... sorry, two. And that was the end of the matter. Until the police raided my flat and found the pictures in 1974. Took them to court and, of course, the judge nearly had a heart attack! Well apparently, he has had one! ... but I know he's dead, I mustn't be ... You know, it would be very tempting to use your interview to lay into the injustices of my trial and judge Argyle. But I'm not going to do that; I'm just telling you all the basic facts. If it sounds a bit frivolous at times, its not because its [sic] not true, but its [sic] because I can look back at it now ... but at the time it was taken very seriously. And he actually said at the Old Bailey, passing the photograph to the jury he said ... "Members of the jury, look at that closely " ... It was almost as if he was enjoying it! ...1

What was the mysterious 'American magazine'? At first, I thought it must've been an occult or paranormal rag. Makes sense, right? However, finding the right one would've been a needle-in-the-haystack situation. I had no references to work with, so I left it in the back of my mind. That's when serendipity stepped in.

One night, while trawling through Google Books for references to the case, I came across an interesting snippet from a magazine entry. An American magazine, no less. It discusses Farrant and mentions they'd decided against publishing his article. It even dates 1973, contemporary with events described. Tick, tick, tick, tick.

So, what was the name of the magazine? Was it an occult/paranormal rag? No, it wasn't, surprisingly enough. It was, well, how do I put this? A 'wank mag'. Penthouse, in fact.

I was reasonably sure I'd found the mysterious American magazine in question, because Farrant mentions sending an them an article in Kev Demant's 'book':

Apart from the legal stuff, when I had time to spare I wrote a few articles. I sent one to New Witchcraft which was used, and I mean, every single word was used. It was written on old scraps of paper, anything I could get together because obviously, they wouldn't have given me official writing paper to do that, apart from which, it would have been stopped anyway. That was smuggled out and used. I also wrote one for Penthouse, because ... they'd played up the sex angle in court and all the papers were implying ... I thought, well, it's a magazine, they could be half-serious. I mean, bloody hell, it was sold in W.H. Smiths ! So I wrote to them. As far as I can recall, it was an article about witchcraft, what really went on in Wicca and, more to the point, what didn't. That we regarded sex as a pure and natural thing, that it only became abused and corrupted by the minds of men. And they only sent the article back ... [my italics]

I had a citation, so now it was just a matter of tracking a copy of the mag. USEDmagazines.com (ok, not the best site name for selling such mags) had 1973 issues of Penthouse. Perfect! I provided the citation, and made sure the article—'Witch report'—was featured in the relevant mag. However, a stumbling block was immediately thrown my way. Try as she might, Wendy—an excellent and incredibly patient customer service rep—couldn't find the article. She even checked all issues from that year, but it simply wasn't there. How odd. 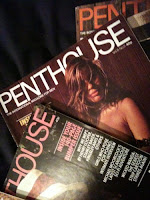 I located a copy on eBay for  £12.99 (+ £6.48 Royal Air Mail) (left). I double-checked with the seller whether the article appeared in it—it did!—but then I figured I only wanted the article, itself. Might've been cheaper. Only two pages long, after all. So, I contacted the Google Books entry's digitzer—the University of Michigan Library—to see how much it'd cost.

The request was processed fairly rapidly. They found the article, too. Then price came: US$44.00. 'This amount includes our MITS fee of US$15.00 and a copyright fee of US$29.00. Would you like us to proceed?' Hell no!

I was much more polite in my response, of course. I settled on snapping up the eBay copy, but was still mystified as to why it wasn't appearing in Wendy's searches. Then, I started paying closer attention to the citations. I figured out the problem: Penthouse, the American magazine, features month and year on the cover...but the UK version features volume and issue number. The issue I was after? Volume 8, number 8. I also learned that their content differed, too (link not safe for work or children!). Mystery solved! And see, ladies? Sometimes we do buy this stuff for the articles!

I ordered it on January 30th and it arrived yesterday. Does the article feature any startling revelations? Game-changing info? No, not really. There are a few interesting tidbits, though. According the article, Farrant's article wasn't simply refused and that-was-that: the magazine actually interviewed him. 'He was careful to stress from the outset that he was a practitioner of witchcraft, not satanism: "Satanists worship Lucifer, the supreme power of evil, whereas witchcraft is a neutral thing—it's only evil if practised for an evil purpose."'2

There's the usual emphasis on special powers derived from sex—'and Farrant acknowledged that his duties as a High Priest included having intercourse with his High Priestess at some—but not all—of his coven meetings, while his followers are also required to perform occasionally.'3

Farrant also mentions helping a man of diminutive stature—'a midget'—who was being booted out of a controlled tenancy and suffering harassment from them, too. As if that wasn't bad enough, the man's wife was preggers and not coping well with the stress. Farrant 'wrote to the landlady saying politely but bluntly that if she didn't stop we would deal with her our own way.' She was sent an amulet 'consecrated' by the coven, along with a rhyme intended to convey that 'once she'd touched it we'd have power over her, and we performed a ceremony in which we cast forces on her wishing her all she wished on the midgets.' Two days afterward, 'she went into the hospital and lost her baby.'4

The 'midget' is unnamed, but  I've a feeling it's the guy depicted in this photo and this one, too.

It also says Farrant began practising witchcraft, seriously, at 18. Interestingly, the article mentions his current age as 33, which is at odds with the 23 January 1946 birth-date he's usually given.

The last item of note's his accumulation of enemies, including his challenges to duels. One of them, from 'another witch' who challenged him 'to a duel of powers once, and the Sunday papers picked it up and quite wrongly said [he] was going to sacrifice a cat during the course of it.'5

There is, of course, a discrepancy between Farrant's account with the content of the article. His interview with Demant suggests the article was written while he was incarcerated, but the interview in Penthouse took place about a year or two beforehand, in his flat. That means Farrant's memory's either faulty, or he's referring to another article for the mag. I'm hoping it's the former.

However, what you make of Farrant's alternating rationales for composing the article(s)—

'I [sic] was a big American magazine and I thought, well, there's no problem, its [sic] not England and, you know, they promised quite a good payment for it'

'they'd played up the sex angle in court and all the papers were implying ... I thought, well, it's a magazine, they could be half-serious. I mean, bloody hell, it was sold in W.H. Smiths !'