I've just received an announcement from Facebook telling me I'm barred from posting for three days, due to an intellectual property claim issued against me.

A few days ago, I initiated a thread in my Facebook group discussing the recent death of Sylvia Browne, comparing my plight with the one Robert S. Lancaster faced running his Stop Sylvia Browne website:

Not directly related to the Highgate Vampire, but Robert Lancaster is a man I admire and whose delvings into the claims of a paranormalist touches on things I've encountered, myself while writing about the case - the threats to dig up dirt, actual attempts, attempts at discrediting my work through negative rhetoric (Lancaster's website is called "nasty", whereas I am referred to as a "troll" and someone who doesn't ask "genuine questions", etc.) and so on. It's guys like him that inspire me.

And in case you think I'm being tasteless by posting this in the immediate aftermath of Browne's death, it also serves to highlight why we shouldn't glorify the dead who were dodgy in life. Case in point: "And she said, as she says in some of her books, that she will live until she is eighty-eight years old, which is sixteen years from now [2008]." Browne was 77.

Right beneath that post, I posted a link to Hoggwatch, a blog dedicated to stalking me, to illustrate the kind of despicable tactics used to attack me and my research. The blog's byline was formerly credited to "Vebjørn Hästehufvud", who changed his account name to "B .O.S." in the immediate aftermath of my exposé of his dodgy behaviour (which includes using a variety of sockpuppets and stealing the Highgate Cemetery Vampire Appreciation Society's name).

Overlooking the irony of his action, the true author of the blog opted to report me for posting a link to Hoggwatch—not content from the link, mind you, just the link itself—and in doing so, revealed the actual person behind the sockpuppets: 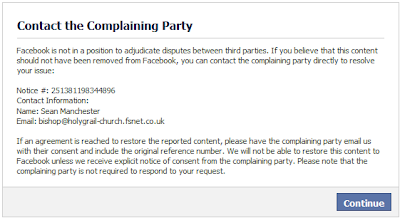 That's right—Bishop Sean Manchester reported me to Facebook for posting a link to a blog he created, dedicated to stalking me. Ladies and gentlemen, I present the man whose jurisdiction English Old Catholics have placed themselves under. At least, in his own imagination.

I have also taken the liberty of e-mailing Manchester, in accordance with Facebook's request:

I am writing in to ask you to restore the content to my Facebook group, i.e. a link to your blog, "Hoggwatch" accompanied by the caption "An example of an attempt at silencing my work". Facebook requests that you email them with your consent, along with the reference number.

I can not fathom why you would report my post for hosting the link, unless you desired to incriminate yourself as its author—in which case, you've succeeded. Well done.

I've done my part. Time for Manchester to do his. I look forward to his reply.
Posted by Anthony Hogg at 12:02 AM