Patrick Sean Manchester negatively responded to a Facebook poll hosted on my Facebook group: "who do you believe? Both David Farrant and Patrick Sean Manchester investigated the Highgate Vampire case. However, their accounts wildly differ and both accused the other of fakery. But who do you believe based on your own readings/watchings of the case? Choose your options, below." The options were: David Farrant, Manchester, Not sure, Neither, and A bit of both.
In response to a vote that has so far only swung between Farrant and Neither, Manchester had the following to say: "The name of Hogg's group (identical to the name of one of my own groups) is paraphrased from a newspaper headline and article that introduced me and the Highgate case to the world a long time before Anthony Hogg was conceived, much less born, in far off Australia."
Regrettably, Mr. Manchester failed to mention that the group's name was identical to one of his because he had copied my group name. The group name—sharing its title with this blog, and initially used in 2006 as a MSN Spaces forum—was indeed based on a newspaper headline. However, Mr. Manchester did not disclose the relevance of my age and location.
His post was accompanied by the following diatribe embedded into a screencap he took of the poll, despite previously acknowledging he has blocked my account thus indicating he should have no means to view it bar alternative identities: "Anthony Hogg has begun to run a poll on a Facebook group he uses to post abuse and misinformation about me [Mr. Manchester gave no examples of this alleged abuse and misinformation]. Anthony Hogg has begun to run a poll on a Facebook group he uses to post abuse and misinformation about me. It was opened a handful of hours ago and apparently nobody believes my account while 25% believe the late David Farrant's account regarding the Highgate Vampire case, which is curious view of the fact that Farrant didn't believe in the Highgate Vampire." Why Mr. Farrant would have been obliged to believe in the existence of a vampire to investigate a case was not disclosed.
Mr. Manchester continues: "That notwithstanding, those who are members of Hogg's group are extremely hostile towards myself. That also applies to visitors to his group for the most part." Of the group's 252 members, only a handful post or comment in the group. Few are overtly hostile toward Mr. Manchester (the group's posts are viewable to readers due to its public setting). However, there is no standing policy against who may join save those who agree to follow the group rules. Indeed, Mr. Manchester has previously been invited to join the group himself but appears to be too frightened to do so.
Mr. Manchester, a frequent visitor of the group, did not disclose how he determined visitors from members as only members may comment in the group.
"Furthermore in his preamble above the poll," Mr. Manchester continues, "Hogg describes my name incorrectly. It is correctly described in all my documents that are used for identity, and not as Hogg would have it. The false addition comes from Farrant without whom Hogg would flounder." While the description of his name was derived from Mr. Farrant in a roundabout way (the divorce certificate included on Don Ecker's report on the Highgate Vampire was obtained by Ecker from Farrant), it has been independently verified from birth records viewable on ancestry.co.uk. Mr. Manchester's penchant for aliases has been remarked on this blog before.
Several hours later, Mr. Manchester posted another diatribe against the poll: "After nine hours, Anthony Hogg's poll reveals that 50% of all who voted believe David Farrant's version of events while 0% believe mine. However, this could be due to only six votes being cast on a group exceptionally antipathetic towards me." Far likelier the result reflects the implausibility of Mr. Manchester's account, riddled as it is with inconsistencies, revisions and a lack of reliable evidence.
Mr. Manchester's grumble continued thusly: "One could almost name who those 'six' people who voted are. Hogg being one, McWilliams being another, and, of course, Fugly, etc. Morever, they all have multiple Facebook accounts." The easiest way for Mr. Manchester to avoid this uncharitable speculation is to vote on the poll himself: 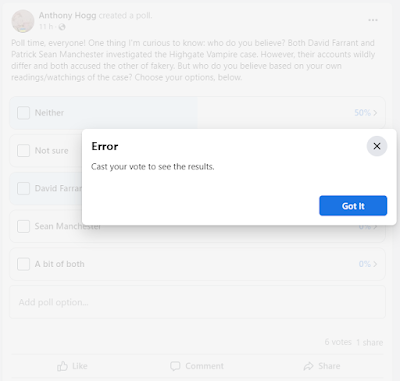 I have not actually voted on the poll, McWilliams has not voted (as of this writing) and no one named "Fugly" has. However, I suspect that "Fugly" is a pejorative for a member of the group (a portmanteau merging "fucking" and "ugly") rather than an actual person's name—a somewhat jarring term employed by an alleged bishop.
The hypocrisy of Manchester alluding to multiple accounts used by other persons (but with no evidence of the same person voting more than once), has been commented on many times before.