"Duh," some of you might've said. But during the course of this thing, how many times have you come across someone actually admitting their part in a hoax at Highgate? Yeah, I thought so. Read on. 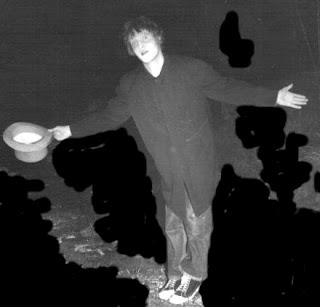 A coupla days ago, I stumbled across the FoBSM's new blog. It's written under a collective name, "Friends of Bishop Seán Manchester" and serves as a veritable "hitlist" of their perceived enemies (including myself). Awash with Manchester-worship, maliciousness, fabrications, hypocrisy, copyright violation, horrid photoshop and regurgitations from elsewhere, the clandestine group has the seal of approval from Seán Manchester, himself.

Buried deep within the manure, you'll find the occasional items of interest. One particular entry concerns an "informal dinner party in the summer of 2009 hosted by Bishop Seán Manchester and his wife at their spacious retreat on the south coast of England", the latter probably funded by the generous donations of Manchester's parishioners. Or, perhaps purchasers of his "best-selling books", which have been in continuous availability since 1991.

Anyhoo, the dinner in question was held in honour of Tony Hill, an associate and former employee of Manchester's. As is usual in the Case, some cross-contamination's involved: Farrant used to stay at Hill's place, after he was evicted and bankrupted. "Some of the guests were also members of the Vampire Research Society fascinated to hear what Mr Hill might have to say about David Farrant", namely, the same group that advises Farrant is best "ignored". The Bish can't get enough of him, either, despite giving the same "advice".

There's three stand-outs about the FoBSM blog entry in question: 1) it reveals the Bishop has actual friends even if they have no names, 2) it's plagiarised from a dead Hungarian scholar's MySpace blog, 3) Hill boasts about participating in a collaborative hoax with Farrant. Here's the claim:

It was in the winter of 1969/70 when Mr Farrant suggested to Mr Hill they attempt to hoax a ghost story to see what the public reaction might be. Mr Hill went along with Mr Farrant's idea, but had lost interest by the end of the year. In the pubs he frequented, Mr Farrant heard tales of a vampire reputed to haunt Highgate Cemetery and wanted to see how easily it would be to convince local residents that there was also a ghost in the vicinity. Mr Hill photographed Mr Farrant wearing "ghost" make-up at night in the graveyard. He was also privy to Mr Farrant using the addresses of acquaintances such as Nava Grunberg, Kenneth Frewin and Audrey Connely to submit fraudulent letters to local newspapers. It was always Mr Farrant's intention, Mr Hill revealed, to eventually expose the "ghost story" as a hoax to show how gullible the public are when it comes to things paranormal, but events overtook this plan as the terrifying reality of an emerging supernaturalism eclipsed David Farrant's asinine antics. Meanwhile, Mr Farrant was quickly becoming addicted to the attention he was starting to receive in the press.

And that's just the tip of the iceberg. I've asked David what he has to say about these charges, but he hasn't responded yet. In the meantime, let's turn to his blog. Or, specifically, one of its entry's comments section.

The entry in question concerned yet another talk (yawn) on the Highgate vampire. John Baldry's Cat, one of David's fans, got the ball rolling with a comment concerning the "ghost" photo depicted at the top of this page:

What’s with this picture, David? Does “Bonky” own the copyright on this? What was going on there? – It looks like you’ve had about 15 drinks at a pub, or are “auditioning” for an east end musical, or both!

As usual, David handpassed the blame back onto Manchester, not-so-subtlety referred to as "Bonky:

That was just one of the many pictures Bonky took of myself Cat in early 1970. He said (then) he wanted them for a book he was planning on myself.

I believe he used a couple of these at a later date, but completely out of context from their original meaning!

So that’s how they’ve turned up on his self-originatd site!

The conversation's joined by American Psycho, who pointed out a rather obvious "glitch" in the photo, that is, a sizable portion looks like it's been scribbled over by a 3 year-old with a texta: "Erm, with that pic, looks like Bonky blacked out parts of it…more of his revisionism?"

John Baldry's Cat made like Rorschach and squinted background details into the picture:

That photo is odd, over Farrant’s right facing shoulder you can barely make out an angled window, similar to a van’s windscreen. The blacked-out portions seem to be an attempt to disguise a street sidewalk.

David where was this photo taken?

David didn't confirm Cat's "angled window" theory, but did revert the "blame" back onto Manchester:

It was taken by Bonky, Cat, in late 1969/early 1970 and is of the path leading frm the top gate in Highgate Cemetery. In fact, the ground was covered in snow which might explain all the ‘blacking out’.

Anyway, the photo was taken by the bonky one who was with Tony Hill when it was taken.

He censored snow? You know things have gone barmy when he presents this deliberate topographic omission as it was the most obvious thing in the world.
Posted by Anthony Hogg at 5:21 AM