The FoBSM's 'hit list' blog has an entry about me which I've neglected to cover, until now. Time to dissect their hatchet job.
Their blog entry has been revised numerous times (with no notes made about the edits) and one of the reasons I feel 'safe' in covering it now, is that until recently, it featured the photograph of someone they presumed was me along with - what looked like - a home address. It was the exact same photo and address that had been forwarded to me by a stalker on the Arcadia forum.

Therefore, I decided not to draw attention to their blog entry, lest this innocent party be exposed to further attention and distribution of his picture. However, it was some relief to find that the 'home address' they'd posted was actually that of a petrol station. Despite repeatedly telling and proving that neither the photo nor the address were mine byway of the Supernatural World forum, the 'details' of this innocent bystander remained in their blog entry for some time, before they caved into common sense.

How they connected the photo with the address still remains a mystery. Indeed, why they'd even try to seek out an 'unmasked' picture of me as well as publicly posting 'my' address has never been explained. But that's just the tip of the iceberg.

The FoBSM's blog entry labels me as a 'stalker', which I can't help but find amusing, when the same entry describes me as 'Anthony Hogg, who lives in a suburb of Melbourne, Australia', includes a stolen pic of me, publishes my private correspondence with a forum member named 'Vampire Researcher' and, of course, previously featured an 'unmasked' picture of me along with a 'home' address.

I'm also described as an obsessive, once again, an amusing charge, when one of Vampire Researcher's correspondents says 'I spent (or rather wasted) a good couple of hours going through Anthony’s blog', without a trace of irony. Really, I should be flattered.

The third main charge labels me as an 'harasser', but no specifics are given into how my 'harassment' manifests except to say that I harass David Farrant and Sean Manchester 'almost every day of [my] life'.

In the midst of all this guff, there's also a pointed jibe at my anonymity ('Mr Hogg, who always hides behind a demonic mask'), yet the blog entry's author lists themselves as 'Friends of Bishop Seán Manchester'. And here's their own profile pic: 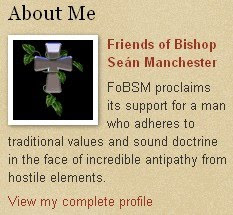 And my 'demonic' mask? It's actually a vampire mask. I thought the fangs, corpse-like 'skin tone' and widow's peak would've given that away.

They also mention my publication of a 'UK address in full', something I won't deny. But what they don't mention is that the address I published was a business address. Gothic Press's, in fact. The same address that Gothic Press freely published online. You can view it in this blog entry's footnote, as well as the link I obtained it from. The hypocrisy in their criticism is revealed in their Don Peek entry, in which they display no issue with posting his business address. Clearly, what's good for the goose isn't good for the gander.

But who is Don Peek and what is his relevance to their blog's coverage? FoBSM cites him as 'Don Ecker's internet service provider who stepped in to help when Mr Ecker's previous server deleted a cache of stolen images owned by Bishop Seán Manchester'. I should also point out that they've posted Peek's picture along with the entry.

It's admittedly strange to see them take such umbrage at the publication of 'a cache of stolen images', when the person they're 'defending' is actually a blatant plagiarist, who also includes 'stolen images' in his web output, just as they do.

Lastly, I'll discuss their claims of my (alleged) censorship, or, as they put it 'Mr Hogg who adopts the tactic of censorship with anyone favourable to Bishop Manchester'. Yet another bizarre accusation, considering the posts I've allowed from 'Gothic' aka 'Demonologist' aka 'The Overseer' aka 'Vampirologist'. Read through the comments in this entry, for instance. Oh, and this entry features a comment from Manchester, himself.

Speaking of 'Vampirologist', FoBSM mentions a comment from him 'still awaiting moderation', which will 'most unlikely ever to see the light of day'. The funny thing is, I have not seen his comment awaiting moderation on any of my blogs. I'm not saying it was never posted, of course, I'm just saying I've received no notification for it. I will mention, however, that it's not the first time they've evidenced that kind of paranoia. In fact, I'm more than happy to post Vampirologist's comment right here, byway of their blog. Here it is, and I'll even respond to it:

You offer "[Bishop] Manchester's 'profession'" as "Britain's only full-time vampire hunter" when you know very well that Seán Manchester has never described himself as such. That description belongs to somebody else. You purposely fail to attribute it to its source because that would affect the false picture you wish to present of the man whose profession is that of bishop with a specialist ministry in demonolatry and exorcism. But you already know that, Anthony, don't you? It just suits your agenda to misrepresent what his full-time profession really is.

Your petty obsession with this man and the case he investigated four decades ago is a clear indication of your state of mind. Bishop Seán Manchester has given his final interview on the vampire case that made him a household name. Why can't you now give it a rest?

Year after year you irritate the hell out of people on the internet with your compulsive behaviour and obvious fixation with Seán Manchester whom you misrepresent and abuse from one week to the next. What is the matter with you? There must be something seriously wrong when you focus on a stranger twice your age living on the other side of the world who you don't know or especially like.

You either need to get a life or at least get some professional psychiatric help. I'm serious, Anthony. You are out on a limb. Nobody supports your behaviour. At best, it is tolerated. At worst, it is considered pathological.

This is not the beginning of a dialogue between us, Anthony. Knowing how obsessive you are where these matters are concerned, it is the end of one.

Vampirologist's criticism of my reference to Manchester as "Britain's only full-time vampire hunter" appears to be referring to a recent entry on my amateur vampirologist blog. It's true that (as far as I know), Manchester doesn't refer to himself in this way. However, I didn't say he did, either. Indeed, I placed the description in quotation marks, as you'll see.

The description was taken from Joe McNally's review of Manchester's The Vampire Hunter's Handbook (1997). This 'endorsement' is actually incorporated into Manchester's website. Note, there are no retractions to go with it. Therefore, it's perfectly reasonable to assume that it's a title Manchester's happy with.

Once again, the 'obsessed' card is played against me, but with no sense of context. This blog is about the Highgate Vampire Case, as I clearly outlined in my first entry. How exactly am I supposed to talk about the case without discussing Manchester to a large degree, considering he was central to the story's 'plot'? Or David, for that matter. That'd be like advocating a blog dedicated to Dracula, which omits mentions of Van Helsing or the Count. Once again, how my 'obsession' manifests, isn't made clear by my accuser.

Vampirologist then goes on to claim that I 'misrepresent and abuse [Manchester] from one week to the next' but doesn't say how, when or where. No specific instances are given. No specific posts are mentioned or linked to. Just like FoBSM (of which he's a member), he resorts to hyperbole and ad hominem attacks against me at the expense of proving his case.

The childishness, maliciousness and pettiness displayed by both the FoBSM and Vampirologist makes the purpose of the group redundant if that's how they show their 'support for a man who adheres to traditional values and sound doctrine in the face of incredible antipathy from hostile elements'. Or, in other words: pot, kettle, black. In fact, their blatant hypocrisy could be symptomatic of narcissistic personality disorder, not aided by the fact that the Bishop is very clearly aware of their activities.
Posted by Anthony Hogg at 7:48 PM