Yesterday was International Talk Like a Pirate Day. To (belatedly) commemorate the occasion, let's take a peek at a paranormal pirate 'investigated' by David Farrant. 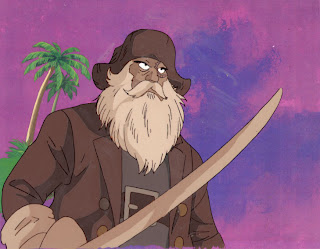 He reproduced an article covering the event from the Evening News, dated 'Wednesday 1, 1972'. While a month would've been helpful for citation purposes, we can pinpoint it to November, thanks to contemporary coverage of the case (e.g. 'Halloween ghost couple held', Daily Express, 1 November 1972, p. 13). Citations have never been Farrant's strong-point.

However, far from detailing any supernatural activity, the press coverage concerns the arrest of Farrant and his assistant, Victoria Jervis (listed as 'Lucy Grant' in the Daily Express account) while conducting a summoning ritual in St. Mary's churchyard, Monken Hadley, Barnet. On Hallowe'en night, no less.

The reproduced Evening News article describes Farrant's intent: 'Farrant, 33-year-old President [Farrant would have been 26 at the time, as he was born on 23 January 1946] of the British Psychic and Occult Society [his organisation was not called this until 1983. Farrant must have incorrectly transcribed the article], explained . . . "The ghost of Wallmsley the Pirate comes out twice a year - on Hallowe'en and Christmas Eve."' The source for this tale, was 'local stories'.

The couple were charged with 'disfiguring a churchyard' ('Halloween ghost couple held'), which later articles would clarify as 'indecent behaviour under the Ecclesiastical Courts Jurisdiction Act of 1860' ('"Ghost watchers" fined for ritual in churchyard', The Guardian, 23 November 1972, p. 10). They were fined £10. The same article mentions the presence of a reporter, who, according to Farrant was only there to 'be a witness if the spirit appeared'. He also denied informing the press. If that's the case, he certainly chose a strange 'witness'.

There is evidence that Farrant didn't tip-off the press, in this instance: mainly because it's clear he got his assistant, Victoria Jervis, to do it instead. After being subpoenaed for another one of Farrant's trials (in 1974), here's what she had to say about her involvement in the ritual:


I have tried to put most of what happened out of my mind. The false letters I wrote to a local paper were to stimulate publicity for the accused. I saw him almost every weekend in the second half of 1972 and I went to Spain with him for a fortnight at the end of June that same year. I was arrested with him in Monken Hadley Churchyard. That incident upset me very much. Afterwards, my doctor prescribed tranquilisers for me.

She added, 'You have photograhed [sic] me a number of times in your flat with no clothes on. One photograph was published in 1972 with a false caption claiming I was a member of your Society, which I never was.'

And reporter in question? 'By coincidence, her cousin was a reporter on the Barnet Press', as Farrant mentioned in Dark secrets: a true story of Satanism, Black Magic and modern day Witchcraft exhortations (London: British Psychic and Occult Society, 2001), p. 70. The irony is, Jervis was not even 'qualified' to participate, as the same page says: 'For the purpose of this ritual, I planned to use a psychic medium (in fact, one who helped in the Highgate Cemetery ritual some two years before) but, as she was unavailable at Hallowe'en, I chose an assistant called Victoria Jervis instead.'

After noting that Jervis was 'visibly shaken' by this event, he went on to say, 'Her cousin had certainly come across a good story but, now, before the case had even come to court, the episode had found its way into the national press' (p. 71).

The funny thing is, all these troubles could've been avoided if Farrant took the trouble to conduct an actual investigation, rather than trespassing on church property to conduct rituals in the dead of night. The 'mystery' of our ghostly pirate, Tom Wallmsley [sic], was unravelled by Jennie Lee Cobban.

For those unfamiliar with Cobban, a local historian and archaeologist in Barnet, she was the original founder of the Highgate Vampire Society. According to Farrant:


So lets begin at the beginning: in the latter part of 1995 a historian from Barnet started The Highgate Vampire Society. Her name was Jennie Lee-Cobham [sic]. She began the Society when she was researching material for a book (published in 1996) on ghosts in North London, including Highgate and the Barnet area. This was started mainly as an historical Society, but in 1997, the work-load got a bit too much for Jennie and she asked me if I would be interested in taking this over from her and running it as a ‘sister society’ to the British Psychic and Occult Society. I agreed, and kept the name and the membership she had gathered up to that point.

A similar version of events was recounted on the Arcadia forum:


In 1995, a lady called Jennie Lee Cobban was researching a book on the history of Barnet and Enfield, and had contacted myself. She was particularly interested in a case I was involved with at Monken Hadley churchyard, when I was arrested for 'summoning up a pirate's ghost' in the churchyard, in October 1972. She was also interested in the so-called Highgate 'vampire' case that had occurred in Highgate in the early 1970s.

She had been commissioned to write a book on the history of Barnet and Enfield, and she also wanted to include the so-called Highgate Vampire case as well.

For this purpose I was invited to her home in 1995, and learned that she had done a lot of research into the Highgate 'vampire' case. Because of all the interest, she had at that time formed a society, the Highgate Vampire Society, which she had set up to deal with the interest into this particular subject.

Her book came out in 1997 [sic], and was titled 'Geofrrey de Mandeville and London's Camelot: Ghosts, Mysteries and the Occult in Barnet', and dealt with these aspects, as well as including a chapter on myself.

As part of her research - as said - Jenny had already formed the Highgate Vampire Society, and because of domestic reasons she asked me if I would be willing to 'take this over'. I did so, using the name, and all of her initial membership.

Those are probably the only references you'll find to its founding, as this 'history' is not mentioned in the Highgate Vampire Society page. If anything, it alludes to Farrant being its sole founder and Cobban's role has been all but 'erased':


But in 1997, following a mass of speculation about the so-called Highgate Vampire and misguided controversy that had come to surround his name - not least because this had spread to a world wide interest in the case - David Farrant decided to form the Highgate Vampire Society, its purpose (as he said at the time) . . . “One of our main aims will be to become a repository for all the oral history and written data concerning the Highgate Vampire”.

While Cobban makes no mention of founding the society in the book Farrant mentions, Geoffrey de Mandeville and London's Camelot: ghosts, mysteries and the occult in Barnet (Barnet, U.K.: The Author, 1996), she does deal with the Monken Hadley case:


David may console himself with the knowledge that even had he managed to conduct his ceremony uninteruppted in 1972, he would still not have managed to raise the ghost of a pirate at Monken Hadley, because no pirate was ever buried there (p. 138).

She went on to say, 'The gravestone in question is that of Walter Walmsley who died in 1723 at the age of 42. His grave is certainly decorated with a design of a skull and crossbones (still just about discernible), but this was a very common funerary emblem and was never intended to imply that a pirate had been buried in the grave.' Indeed, the 'skull and crossbones' motif was used by pirates because of its symbolism, not to signify pirate graves. Here's more on trends with tombstone motifs:


Early monuments and grave stones in Europe and in old New England were crude and were carved with frightening motifs like winged skulls, skeletons and angels of death. The idea was to frighten the living with the very idea of death. In this way, they were apt to live a more righteous life after seeing the images of decay and horror on the markers of the dead. It would not be until the latter part of the 1800’s that scenes of eternal peace would replace those of damnation.

'Coincidentally', Farrant does not mention these revelations in his subsequent books which cover the case. A classic example of 'mystery mongering'. Therefore, it's safe to assume the story's a bunch of arrrse.

Edit (26 January 2012):  Farrant actually does acknowledge the revelations in one of his publications, Rob Milne's Return of the vampire hunter: an exclusive interview with reclusive vampire hunter, David Farrant (London: British Psychic and Occult Society, 2003). Sort of: 'A ghostly pirate. Presumably the reason it was supposed to be the ghost of a pirate was because a very small 17th century gravestone known as the pirates [sic] grave, had a skull and crossbones on it and so people imagined that it was a pirate (p. 12).

However, this revelation is obviously derived from Cobban, sans acknowledgement. After all, what was Farrant trying to summon, if he was aware of this 'urban legend's origins at the time?
Posted by Anthony Hogg at 2:02 PM