On Friday, I received a few issues of the Vampire Information Exchange (VIE) newsletter, VIEN, which discussed the Highgate vampire case.

I chased 'em up based on the citations they were given in Rob Brautigam's article, 'The vampire hoax of Highgate Cemetery'. After reading through them, I was left wondering: was it worth chasing them up in the first place? Here are the articles in question:

I recognised the first article as something that'd also been reprinted in Fate (May 1985, pp. 74–80)*, which, in turn, was originally published in the Society for the Investigation of the Unexplained's journal, Pursuit, vol. 16, no. 3. VIEN adds that the article was originally printed in 1983. It also mentions that Thompson was a former VIE member. 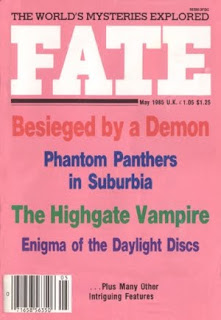 The difference between 'em, is that the Fate reprint omits the reference list that VIEN's version retains. So, you could go out of your way to score the VIEN issues featuring Thompson's article—and believe you me, they're not easy to come by—or, you read its 'missing' reference list here. It's from VIEN's 23rd issue (November 1984, p. 12). I've rendered the underlined titles in italics:

Summers, Montague, The Vampire: His Kith and Kin, University Books.

Some interesting stuff there. For starters, Occult, appears to be a precursor to The Cross and the Stake, the Vampire Research Society's newsletter, which, in turn, transmogrified into an online forum of the same name. The volume and issue number of Occult is quite daunting: it must be nearly impossible to score a single issue of the newsletter, little alone all the issues.

Sylvaine Super Star is no doubt the work of French actress, Sylvaine Charlet, who Manchester captions 'a glamourous and invaluable ally' in the '85 edition of The Highgate vampire (1985, p. 100). According to the book, she also accompanied him on vampire vigils...and masquerade ball (pp. 118—20, 123—4).

Thompson's article, itself, makes references to the MS which would later become The Highgate vampire (1985). I definitely recommend Thompson's article, but it might be easier and cheaper to score it from Fate. I, however, am gonna try and find the original Pursuit version, as I'm a stickler for first editions and such.

Youngson's 'Highgate - fact or fraud?' (November 1984, pp. 19—20), on the other hand, appears to be an original article. She was the president of the Count Dracula Fan Club (now Vampire Empire). The article recounts a recent trip to Highgate Cemetery, in which she is taken on tour by a 'member-volunteer'. Naturally, she asks about the vampire, who mentions that such accounts are discredited by the cemetery's caretakers, the Friends of Highgate Cemetery. There's even a perfectly rational explanation for the mysterious dead foxes allegedly found in the cemetery—something neither Manchester nor Farrant seem to have mentioned in their writings.

She is very critical of Farrant's behaviour at the cemetery, however, she mistakenly assumes he was responsible for a corpse being propped up in a car (someone else came forward during Farrant's 1974 trial, admitting to the crime). Lastly, she deals with the 'controversy' over the cemetery's setting for Bram Stoker's Dracula (1897). It is commonly assumed that vampiress, Lucy Westenra's tomb was located there. However, closer readings of Stoker's novel (which Youngson alludes to), have produced very different results.

The issue, itself, is billed as a 'Highgate Cemetery Edition'. Apart from the remainder of Thompson and Youngson's article, it also includes reprints of articles from The Times (referred to as the London Times, due to the paper's American publication) and one from the National Examiner, 'Real-life vampires roam cemetery' (August, 1984). Despite the article's date, its content harkens back to Manchester's 'Highgate vampire' chapter for Underwood's The vampire's bedside companion (1975).

However, there is one very noticeable difference. The assistants featured in Manchester's chapter, are here described as 'two policemen'. Surely there's an error here. That's probably not surprising, considering the paper's reputation: 'Like other tabloids, its contents have often come under question, and it has been derided for its sensationalistic writing.'

So, can I recommend chasing up these issues? Apart from Youngson's original article, no, not really. If you want newspaper articles, you're better off finding the originals, especially with the advent of digital archives. Thompson's article is a goodie, but if you can get it elsewhere, why bother? Its not even the original printing.

That's not to dismiss the VIEN altogether. After all, I've heard of some juicy stuff in the newsletter's sixth issue. Who knows, there might be more interesting tidbits buried there. But I think it's safe to say that you can give these ones a miss.

* A Fate article I already had.
Posted by Anthony Hogg at 1:03 PM