The Hand That Feeds

As to your quip . . . “Without the Highgate vampire case they wouldn’t be talking here at all”, etc, I rather think that relates more to yourself Anthony! You seem unable to talk about little else; notwithstanding its 40-year old history! It is YOURSELF who keeps incessantly referring to this case Anthony – almost like you’ve got some sort of obsession with it!

I am really not interested in that particular case anymore, Anthony, It is DEAD (excuse the pun!) there are far more many genuine cases of psychic phenomena to be investigated apart from that one!

For someone "really not interested" in the Highgate Vampire case, he certainly doesn't mind cashing off and promoting it, as this item posted on 16 June 2013 reveals:

I gave a Talk on the Highgate Vampire on Thursday evening for the Gothic Valley Women’s Institute (WI) based in North London.  It was at a quiet pub on Hornsey Road where they regularly hold their monthly meetings.  I’m not too sure why they invited myself (although I have heard a rumour that my wife Della ‘loaned’ me to them for the night for an undisclosed sum); but it was probably because I was always considered central to that case when it first broke in the news in the late 1960’s/early 1970’s.  A ‘real life’ vampire lurked in the dark decaying Victorian tombs in Highgate Cemetery – at least, according to some.  Although never to myself.  The British Psychic and Occult Society had only been investigating sightings of a ghost that had been sighted there by several local witnesses: it was certain other people who had approached the local Press at that time claimed that this reported figure was in fact a ‘blood-sucking vampire’, despite them knowing full well that this was a figment of their own imaginations designed to attract the sensationalist Press.

Though Farrant denies association with the vampire theory, he actually presented himself as one of its proponents in 1970. At least, to the "sensationalist Press" he hypocritically chastises:

The worst I did was to go along with another person's innane [sic] wild assertions about a 'blood-sucking vampire', but again, this was only because this was the 'angle' the Press and television wanted at the time - 'vampires' apparently selling more newspapers or attracting more interested audiences for TV.

The other person alluded to is Sean Manchester. Manchester broadcast the vampire theory in the Hampstead & Highgate Express's 27 February 1970 article, "Does a Wampyr Walk in Highgate?" On 6 March 1970, he and Farrant appeared alongside each other in an article called "Why Do the Foxes Die?":

"Several other foxes have also been found dead in the cemetery." he said at his home in Priestwood Mansions, Archway Road, Highgate. "The odd thing is there was no outward sign of how they died.

"Much remains unexplained, but what I have recently learnt all points to the vampire theory being the most likely answer.

"Should this be so, I for one am prepared to pursue it, taking whatever means might be necessary so that we can all rest."

The double standard displayed by Farrant regarding his talk to the Gothic Valley Women's Institute was remarked on by Blackorchid AngieWatkins (Angie Watkins):

Yes,well,you have to ignore all that-its part of the Farrants silly affected "false modesty"!I mean the bloke and his wife are publicity mad,so why pretend youre [sic] not?Why not be open and tell the truth about it-if you wish to be in the public eye,come out and say so!Its all phoneyness [sic].

Going back to Farrant's 1 February 2010 comment–"You seem unable to talk about little else; notwithstanding its 40-year old history! It is YOURSELF who keeps incessantly referring to this case Anthony – almost like you’ve got some sort of obsession with it!"–obviously applies to Farrant, himself. A classic case of psychological projection.

Not only does he still gives talks on the subject, but he's also presently involved in an upcoming film with Kevin Crace called, The Highgate Vampire Chronicles. Indeed, Farrant's comment was made on a forum discussing, yep, you got it: the Highgate Vampire.

This adds another twist to the tale: Farrant's been banking off the Highgate Vampire since 1970. That means he owes his nemesis–Sean Manchester–a huge favour. After all, if Manchester hadn't changed Farrant's ghost into a vampire, would anyone really know who Farrant was? Would he be invited to talks, give lectures, participate in TV shows, documentaries, recycle content in his books?

If Farrant's a victim of the publicity generated by Vampire, he's also the one sticking his neck out for it. 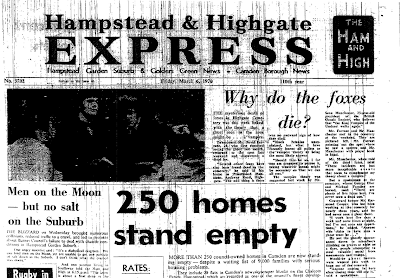