On Thursday night, I was reading J. A. Brooks' 'Highgate' chapter and came across allusions to the cemetery's haunted past: 'Highgate Cemetery has long had the reputation of being one of the most haunted, evil places in London.'1 But for how long?

According to David Farrant, 'Some interesting facts came to light' during his investigation. 'Firstly, it became apparent that stories of an apparition in Highgate cemetery had by no means begun with the then current sightings. Indeed, similar tales dated from the Victorian Era and interestingly enough more of them had "vampiristic" connections.'2

'One of the earliest of the strange incidents that have taken place her [sic]', Elizabeth Siddal's exhumation on 5 October 1869.3 She was the wife of Pre-Raphaelite poet, Dante Gabrielle Rossetti. He'd buried a book of poetry with her when she died in 1862, but later wanted it back. Upon exhumation, her body was 'described as perfect upon coming to light.' But Rossetti was not present.

As noted elsewhere, the witness—Charles Augustus Howell—had a decidedly nasty reputation and his testimony is somewhat suspect, as a result; especially as he was personally invested with publishing the book and perhaps easing 'Rossetti's guilty conscience'. Brooks listed no other 'strange incidents' from this period.

After discussing the Highgate vampire case, Brooks states 'There are more orthodox supernatural activities that occur in the cemetery apart from those involving voodoo and vampires. An old madwoman distractedly searches among the tombs for the children she once murdered; a tall man with a black hat mysteriously fades into the walls of the Cemetery at Swain's Lane; and a ghost with bony fingers lurks near the main entrance.'4

Despite claims of spectral consistency, such diversity upholds Bill Ellis' observation that 'the most impressive detail is the sheer amorphousness of the Highgate traditions'.5 In other words, different people saw different things there.

Not only did Brooks give no indication these are Victorian sightings, but one of the spectres was seemingly fused from two, different—and comparatively modern—sources. In 1975, Farrant mentioned 'One of the common tales of that time [the Victorian Era] told of a "tall man dressed in black" who used to disappear mysteriously through the cemetery wall.' 6 Rather than being one of the 'common tales of that time', it likely stems from a letter written by R. Docherty—in 1970: 'Many tales are told, however, about a tall man in a hat who walks across Swain's Lane and just disappears through a wall into the cemetery.'7

Interestingly, Docherty was exposed as a friend of Farrant's—later confirmed by Farrant, himself. Add Victoria Jervis' testimony on Farrant's behind-the-scenes machinations, the hoax tape allegations and we're certainly left with a disturbing picture.

Challenger has entered the ring! 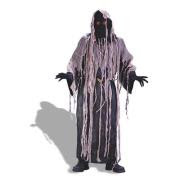 There's a new Highgate vampire forum in town: The Highgate Vampire Appreciation Society. It's a closed Facebook group, though, so you'll need to request membership. I might grant it, too—I'm one of its admins. Ha!

I really didn't want it to be a closed group, but because certain folk seem superkeen on hunting down personal info of their critics, it was really the best option.

It's also good to see a new Highgate blog on the scene. It's called The (Highgate) vampire exhumed!. Its creator—The Dark Spectre—discusses his personal 'journey' with the case and is 'resolved to try to get to the bottom of it all and discover just what was true and what was plain fiction.' Now that's a cause I can get behind! All the best, DS!
Posted by Anthony Hogg at 1:15 PM No comments: