Much like Barbara Green, Catherine has had a direct association with the main factions behind the Highgate Vampire Case. However, her role with both, was much more in-depth and a compelling insight into working "behind the scenes". 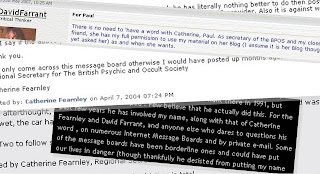 Anthony Hogg: How did you first become interested in the Highgate Vampire Case?

Catherine Fearnley: I first became interested in the Highgate Vampire case through a mutual friend who had met one of the key instigators at a fair. I was led to believe that he was a proper Bishop now and also the head of the Yorkshire Robin Hood Society, I soon became acquainted with the Bishop who in turn told me about David Farrant and The Highgate Vampire. To be fair on the Bishop he advised me not to have anything to do with Farrant as I would only be hurt in the long run, but I went my own sweet way and found out the hard way.

AH: You previously served as a moderator on The Cross and the Stake. How did you obtain this post?

CF: Technically this is not correct Anthony, not only was I the moderator, I was also the creator of this group, I started this group because I had an interest in the case anyway and I was aquainted with Bishop Manchester at the time. I also noticed that they did not have any discussion groups. I was advised by Bishop Manchester not to post up any of my own thoughts on here and to let the members ‘sort themselves out’ to this end I did only posting up general responses which Bishop Manchester gave to me at the time.

AH: You were eventually expelled from this post. What were the reasons given?

CF: Again, I was not expelled as such, I left of my own accord basically because I became involved with Farrant at the time. I was told it either had to be one side or the other I could not be party to both, so I went with Farrant, then Bishop Manchester and his group then started being hostile with me for no reason other then I had become involved with Farrant, it got so bad that I had started to take out an injunction against Bishop Manchester but had to drop this due to personal reasons.

AH: Soon enough, you became the Secretary of the British Psychic and Occult Society, and the Highgate Vampire Society. How did you rise to this position? What tasks did you carry out?

CF: Well as I’ve previously stated I became involved with Farrant, he didn’t have the use of a computer then as such only a word processor so it was easier for me to do the typing and organise membership cards, newsletters, etc and so forth. Also in and among Farrant asked me to make posts against Bishop Manchester which were of a derogatory nature so he wouldn’t have to put his name to them, all of this I now deeply regret no end. In fact I regret ever getting involved with them in the first place full stop.

AH: You were eventually expelled from this role, too. How did this come about?

CF: Basicallly because Farrant got it into his head that I was heavily involved with Bishop Manchester again, also our personal relationship had deteriorated because I had changed my religion and faith for personal reasons which I won’t go into, plus another 101 reasons which all added up to one huge massive argument and Farrant and I went our own separate ways,

I want to make this absolutely clear from the start that I am NOT involved with either party anymore, nor do I wish to be. I have my own life now and it is far removed from what I had back then. I’ve met nice people, made new friends, hopefully got myself a new partner, and have moved on. Pity others cannot do the same.

AH: You've had an exclusive behind-the-scenes view of the opposing parties of the Highgate Case. What have your experiences taught you about them?

CF: Not to get involved with either party. I think that the whole Highgate nonsense came about through a hoax on both sides, both parties are as bad as each other as far as internet wars are concerned. They both use the Highgate case to make money, throw insults at each other especially family, friends, relatives, they both want to hurt and threaten all involved as much as they possibly can, it doesn’t matter to either/or if innocent people are involved with all of this. And to be honest it’s all so completely sad that this matter has been allowed to drag on 30/40 yrs down the line when both men are in their 60’s/70’s and should know better.

AH: Do you believe any supernatural phenomena took place at Highgate? If so, what form did it take?

CF: No I don’t believe that any kind of supernatural phenomena took place at Highgate, I think it was all mass hysteria at the time made no better by the public press making reports and then some crazy person organising a alleged ‘vampire hunt’ people making claims that they staked the ‘vampire’ and such forth. Where is the evidence? There is none , save from the two people who created this ‘legend’.

AH: In light of your experiences, what advice would you give to other researchers, with an interest in the Case?

CF: Don’t get personally involved with either party you will come to regret that you ever did. Keep your findings to yourself, don’t get involved in any message boards as you will become involved in a hate campaign. You will receive death threats, have your email accounts hacked into, have personal information found about you and such forth. I was told by Bishop Manchester’s group at the time that they even knew my National Insurance number and the very job centre that I used to visit at the time. The other party is just as bad for obtaining personal addresses and posting these in public so all can see also they publish private and personal correspondence to all and sundry and in booklet form, make ridicule of your religious believes if you have them and both make untrue stories about you. So take my advice and keep well clear of the lot of them.

I'd like to thank Catherine for taking the time to answer my questions. The items on stalking and harassment are quite interesting and something I've experienced, myself. There's a reason I used to employ a pseudonym, afterall. Here's why I started using my actual name. I've also previously covered the use of Catherine's name as a "front" for anti-Manchester writings.
Posted by Anthony Hogg at 11:54 PM