During the course of my discussions over at The Supernatural World forum, I took the opportunity to interview Barbara Green ("greenorchid") for her thoughts on the Highgate Vampire Case, and her interaction with the main parties behind it. 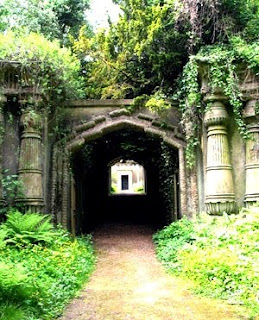 She is the president and founder of the Yorkshire Robin Hood Society. Its current patron is David Farrant; a post formerly held by Seán Manchester. So how did she get mixed up in it all?

I found out by sending her a list of questions via the forum ("Hi Barbara", 16 August 2010 - 03:36 AM), which she responded to ("Hi Barbara", 18 August 2010 - 03:05 AM). I've reconsituted them here in interview form, thus my (originally) numbered questions are replaced with my name and subsequent abbreviations and applied this same procedure to her responses. However, I've retained her upper case replies.

Anthony Hogg: What drew your interest to the Highgate Vampire Case? How did you first hear about it?

Barbara Green: I MET SM [Seán Manchester -ed.] AT THE BARNET CARNIVAL IN 1986. HE CALLED HIMSELF LORD MANCHESTER. I WAS THERE TO MEET JOHN POPE DE LOCKSLEY OF THE LONDON ROBIN HOOD CLUB. SM OFFERED TO BECOME PATRON OF THE YRHS---PLEASE NOTE OFFERED--NOT ASKED BY ME!!!! HE SOLD ME HIS BOOK THV [The Highgate Vampire -ed.].

AH: You were convinced enough of Sean Manchester's claims that you made him the Patron for your Yorkshire Robin Hood Society. On what grounds did you find him suitable for the role?

BG: NO--YOUR ASSUMPTION ISNT QUITE CORRECT---WE NEEDED A PATRON-LADY ARMYTAGE HAD REFUSED. HE ASKED TO BE OUR PATRON. WE THOUGHT HE WAS A LORD AND DESCENDED FROM LOrD BYRON--AS HE CLAIMED.HE THEN TOLD ME ABOUT THE VAMPIRE STUFF.

AH: At some point, your views on vampires changed. What caused you to disbelive in them?

BG: I SUPPOSE AFTER SM STARTED ACCUSING ME OF STUPID STUFF AND I THOUGHT ABOUT IT, I REALISED IT WAS ALL CLAPTRAP IT DID NOT MAKE SENSE FOR VAMPIRES TO EXIST AND HIS KIRKLEES STORY WAS DICKIPOGGY

AH: Later on, you made acquaintance with David Farrant, Manchester's "adversary". How did you get into contact with him?

BG: VIA SM'S INFO HE KEPT SENDING ME ABOUT DAVID.

AH: Eventually, Manchester was replaced as the Patron of your Society, and Farrant substituted in his place. What did you feel that he could bring to the role?

BG: IT WAS JUST HONORARY--BUT HE HAS BEEN VERY SUPPORTIVE WHEN NECESSARY AND HE DID THE EXORCISM!!

AH: What are your thoughts on Farrant's claims of the "psychic entity with vampire-like characterisitics" alleged to haunt Highgate Cemetery?

BG: I GUESS THATS WHAT HE SAW AND THE BEST WAY HE COULD DESCRIBE IT--you problem seems to be with him saying vampire like characteristics, but that is only a descriptive term, it doesnt mean he thought it was a vampire.

AH: Did you ever become a member of any of the organisations associated with Manchester or Farrant? The Vampire Research Society? The British Psychic and Occult Society or the Highgate Vampire Society?

AH: Do you believe that any supernatural events took place at Highgate Cemetery? If so, what do you think the source of this manifestation was?

BG: WHAT I BELIEVE IS NEITHER HERE NOR THERE, AS WITH KIRKLEES WE HAVE TO BELIEVE IT AS TOLD OR NOT BELIEVE IN THE SUPERNATURAL AT ALL; THERE WAS NO DOUBT A LOT OF DICKIPOGGY ALSO AND COMPETITION TO BE THE STAR OF THE SHOW; HOWEVER, I THINK GHOSTS ARE MORE "BELIEVABLE" AS THEY JUST FLOAT AROUND, WHEREAS A VAMPIRE HAS A PHYSICAL PRESENCE, LIVES INA COFFIN, BITES PEOPLE ETC--SO HAVE ALWAYS SAID THE DIFFUCLTIES ASSOSCIATED WITH VAMPIRES ROAMING AROUND JUST COULD NOT SUPPORT THEIR EXISTNCE.IF PEOPLE WERE DYING INEXPLICABLY FROM BLOOD LOSS ALL OVER THE PLACE, DOCTORS, CORONERS AND POLICE WOULD BE INVOLVED, NOT TO MENTION BEREAVED RELATIVES WHOSE COFFINS WERE VANDALISED.

I'd like to thank Barbara for her participation. Just to clarify on a few things, though. The "Kirklees Story" mentioned is something I've previously covered. John Pope de Locksley's also been given a look-in. I've also touched on Manchester's Byronic claims. Lastly, the "exorcism" Barbara mentions, concerns a blessing ceremony held by David Farrant and Gareth J. Medway on the Kirklees estate, to dispell "malefic force reputed to haunt Robin Hood's Grave".
Posted by Anthony Hogg at 6:38 AM