Laying Down the Gauntlet

Could a meeting between Manchester and Farrant become an actual reality? There have been rumblings of a potential meet between the two over at The Cat's Miaow, based on comments made to the "Farrant Rates Women of the World" post. In his September 23, 2009 12:30 AM comment, David writes:

I might consider it if the 'bonky one' would agree to have Dennis, "Demonologist" and "vampirologist" all there at the same time. 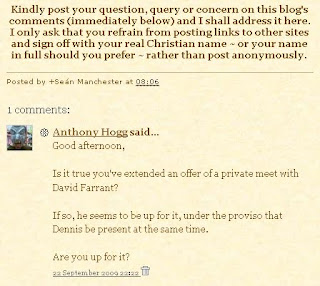 Can the hatchet finally be buried? Are they able to maintain some level of decorum and civility?

Let's hope it goes ahead!
Posted by Anthony Hogg at 3:19 PM