In the previous instalment, I discussed Elizabeth Wojdyla's role in the Highgate Vampire Case. Most of our knowledge of her involvement stems from Sean Manchester. Here I'll deal with Farrant's claim that Wojdyla was "duped" and raise questions about his allegations. 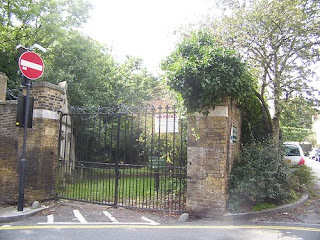 One of the latest conversational threads on The Supernatural World forum concerns the reliability of Wojdyla's testimony as "evidence" for Manchester's claims. Della Vallicrus got the ball rolling with this question: "David it would be really interesting to hear whether what I vaguely remember reading is true, in that you spoke to Elizabeth or heard from her, and that she admitted her part in a 'hoax'."

Her query aroused my interest. I added, "we'd have ourselves a smoking gun. So, let's see some proof. Something in writing, a recording, something, not vague allusions that can't be verified."

This basically concerned the two 'vampire bite marks' on her neck after she had told the author of this book that she had having nightly visitations form the Highgate Cemetery 'vampire'. He published a photograph of Elizabeth on page 73 of his self-published book together with a caption which read . . . "The controversial punctures on the neck of Elizabeth Wojdlya".

So to come back to the main point of your question, Della. Yes I can confirm that Elizabeth confirmed that her whole part in this whole thing had just consisted of a joke - or at least, what she considered to be a 'joke' at the time this photograph of her alleged 'vampire marks' was taken. She also confirmed the identity of the person who took this photograph of her. It was the same person who published the fictional accounts of how he 'staked' the Highgate 'vampire' and its unfortunate disciple he calls "Lusia".¹

He then promised he'd "give details about that tomorrow . . ." In the meantime, I countered Farrant's accusations with an extract from Bill Ellis' essay and encouraged him to say Manchester's name. Didn't have to wait much longer for the second part of his response, which arrived about two hours later:

So what actually happened?

Well, as stated just before, in 1985 , an aspiring ‘vampire hunter’ self-published a book on an alleged ‘vampire’ (and its so-called disciple) that he claimed had existed in London’s Highgate Cemetery. It didn’t anymore, he claimed in this book, as he had ‘staked’ it back in 1973 and then ‘tracked down’ its disciple “Lusia” whom he also ‘staked’ after she had changed into a ‘giant spider’ in 1982. The name of this particular author (there were many more) was Mr. Sean Manchester.

All good stuff for lovers of vampire fiction, I suppose.

But its not quite the end of the story. In fact, an equally ‘good part’ comes near the book’s beginning . . .

Mr. Manchester writes that in the late 1960’s, a story was brought to his attention of how two Convent schools, Elizabeth and Barbara, had seen ‘bodies rising from the graves’ as they walked past London’s Highgate Cemetery late one night. Now, by coincidence – or perhaps not – one of these girls (Elizabeth) was the live-in girlfriends of one of Mr. Manchester’s friends called Keith – or ‘Brother Keith’ as Mr. Manchester ‘reverently’ refers to him.

Now Keith began to get concerned about Elizabeth’s health; she lost her appetite, began to have vivid nightmares and became subject to bouts of sleep walking. Keith calls in Mr. Manchester for his ‘expert advice’ and it doesn’t take him (Mr. Manchester) that Elizabeth has been bitten by that Highgate ‘vampire’! Manchester immediately instructs that her room but adourned with fresh garlic, and she be made to wear a large Christian cross.. He also instructs Keith to feed her on some of his ‘nourishing broth’ in order to help her recover.

She does apparently ‘recover’, and Mr. Manchester goes on to state that she was rescued from the clutches of vampirism – by himself, of course!

That would really be the end of this story, except that in 1985, Mr. Manchester published a photograph in his vampire book showing Elizabeth with two distinct ‘vampire puncture marks’ on her neck. He claimed these to be genuine ‘vampire bite marks’.
End of story? Well, not quite!

In 1979, an Australian friend of mine phoned Elizabeth’s home in Southgate. We were anxious to discover Mr. Manchester’s whereabouts as I wanted to ask him about a series of private photographs of myself that had been sent to New Witchcraft magazine and been published. The editor told me that these photographs had been submitted by Mr. Manchester and he (the editor) assumed that he had my permission. In fact, he didn’t, but that’s another story.

When my friend phoned Elizabeth’s home, she spoke to her parents who gave her then work address and phone number. She was working at Thompsons Travel at the time.

She spoke to Elizabeth, but was informed she had lost all contact a few years before.

But while she was on the phone, my friend had cause to ask her about a black and white photograph (in fact the same photograph that Manchester had published in his vampire book in 1985) that had been published by author Peter Underwood in his book “The Vampires Bedside Companion” published in 1974.

Elizabeth was extremely surprised saying she did not realise that any of these photographs had been published anywhere, and in any event, although Mr. Manchester had taken these photographs, she thought the markings had only been made on her neck .for a joke’!

Serious implications there, but ones that only raised further questions and a few corrections. Here's what I wrote back (sans quotations from Farrant's response, so forgive its disjointedness):

Firstly, kudos for referring to Manchester by name for a change. Well done.

Let's get technical here. The coincidence you're inferring is ex post facto. If we stick to Manchester's narrative, that is. There's no doubt Keith 'n' Sean were (or are) friends. At one point, he even served as the VRS's Regional Secretary (since replaced by Robert Finch) and yes, he later became "Brother Keith" within Manchester's Church.

Question is, were they friends at the time or did they become friends through the alleged experience? Manchester claims in The Highgate Vampire (London: British Occult Society, 1985), that the earliest meeting between 'em occurred in "the summer of 1969" (34). Manchester goes onto say that Elizabeth "introduced [him] to her boyfriend, Keith, a tall young man of Scottish decent whose help was to prove invaluable" (34-35).

Do you have any evidence that they knew each other before this time?

The only mention of "broth" in the whole text is this: "I arrived two hours ago and have been trying to get her to eat some broth I made, but she's hardly touched it," he said (37). That was Keith, not Sean.

While her room was adourned with garlic (the door and window of her bedroom, actually), there's no mention of her being made to wear a "large Christian cross". The closest mention is "A handful of salt in a piece of linen must be hung around her neck together with a silver cross" (39).

What he actually says is, "Keith bathed the small punctures on her neck with holy water until they faded and eventually disappeared. When Christmas came that year, she was her happy, normal self and all was well" (40). But yes, in a roundabout way, she was "rescued" through Manchester's advice.

The picture appears on page 73 and is captioned, "The controversial punctures on the neck of Elizabeth Wojdyla". For the record, she also appears on page 29 in two other photographs. The first's labelled, "Following the authors instructions, Keith did everything in his power to help Elizabeth fight the vampire's influence". The second, "The Polish girl, Elizabeth Wojdyla, in her bedroom towards the end of her nightly visitations".

The "Polish girl" pic appears on the VRS website, captioned "Elizabeth, the convent schoolgirl who months later fell victim to nocturnal visitations from the vampire."

What was your Australian friend's name? How did Manchester obtain a series of "private photographs" of yourself? In what context did they appear in the magazine?

Underwood's The Vampire's Bedside Companion: The Amazing World of Vampires in Fact and Fiction (London: Leslie Frewin) was actually published in 1975. Yes, the bitemark does appear in it, on the plate next to page 64. It is captioned, "The 'mark of the vampire': two highly inflamed swellings on the neck of Elizabeth Wojdyla, a tiny hole in the centre of each. (This picture has been darkened to enhance the marks.)". So, the photo's not quite the same.

Which doesn't really explain her participation in the other photos, unless, of course, you're implicating her in a hoax. It also overlooks her account, published in Manchester's book (presuming of course, that she actually submitted it to him). It allegedly occurred in 1967:

Normally going past the cemetery, when you're just in a normal mood, you can feel the evil presence from the old cemetery. But this time my friend and I were coming down from Highgate Village and we were really in a great mood: we had just been to see a girlfriend and we were happy. We were not talking, just walking. And we were walking down, having just passed the north gate, when we both saw this scene of graves directly in front of us. And the graves were opening up; and the people were rising. We were not conscious of walking down the lane. We were only conscious of this graveyard scene. (22)

Was her testimony a fraud? Mistaken identity?

Your secondhand source does confirm what she did about her photos being published. The only person who could really answer that, is Elizabeth herself. Have you been in contact with her, yourself?

Farrant didn't answer my questions, as he's got me on ignore (so he says). So, if anything, they were for the benefit of the other forum members. Although, it's a bit of a "coincidence" that after I encouraged him to explicitly name Manchester, he actually did so in his follow-up post.

Anyhoo, in the next instalment, I'll discuss a rebuttal to Farrant's claims from a source close to Manchester.

¹ I have discussed "Luisa" elsewhere in this blog.
Posted by Anthony Hogg at 10:53 PM