The Möbius strip is "a surface with only one side and only one boundary component." It's not a concept usually applied to vampire theories, but I'm about to do just that (in a figurative manner). 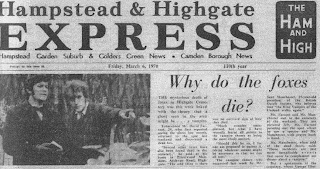 The "model" I'm gonna work with is David Farrant's "The Highgate Vampire - How It All Began", in which he discusses his initial reaction to the vampire theory espoused by Sean Manchester.

Manchester's theory was first published in "Does a Wampyr Walk in Highgate?", Hampstead & Highgate Express, February 27, 1970, p. 1. It came in the wake of various sightings of apparitions in or near the cemetery. And it concerned an honest-to-goodness-bloodsucking undead corpse.

The following week, the same paper covered David's discovery of a dead fox in the cemetery at the spot in which he'd allegedly encountered an spectre. The article was called "Why Do the Foxes Die?", Hampstead & Highgate Express, March 6, 1970, p. 1:

“Several other foxes have also been found dead in the cemetery,” he said at his home in Priestwood Mansions, Archway Road, Highgate. “The odd thing is there was no outward sign of how they died.

This lead him to the following conclusion:

“Much remains unexplained, but what I have recently learnt all points to the vampire theory being the most likely answer.

“Should this be so, I for one am prepared to pursue it, taking whatever means might be necessary so that we can all rest.”

The article goes on to chronicle their meet, indeed, the earliest public record we have of meeting in person. At this point, their theories complemented each other:

Mr. Manchester, when told of the dead foxes, said: “These incidents are just more inexplicable events that seem to complement my theory about a vampire.”

Indeed. Now, back to David's "The Highgate Vampire - How It All Began". It is well-established that David no longer takes such theories seriously, instead offering an alternative theorum. However, his article is comparatively moderate on vampires, in light of his crusade to convince the world that bloodsucking vampires don't exist. Take this, for example:

When the investigation proper began in January 1970, I undertook the task of checking the cemetery's history. Some interesting things came to light ... First, it became apparent that stories of an apparition at Highgate Cemetery had by no means begun with the current sightings. Indeed, similar tales dated back to the Victorian era and, interestingly enough, many of them had 'vampiristic' connotations.

But perhaps most interesting was the 'vampire-like element' that had crept into these stories. Although it was difficult to pin-point the reasons or origins from whence the vampire legend came, it had nevertheless become an integral part of the cemetery's supernatural traditions. The Victorians, with their deep-rooted fears of the unknown and self-righteous attitudes towards religion, morals and death, may have contributed towards establishing - or perhaps re-establishing - a legend that was already in existence.

Whatever the case, it is reasonable to suppose that the Highgate phenomenon could have been connected with stories of vampirism.

David claims Stoker injected - and drew upon - a Victorian era association of vampires with the Cemetery. This presumably refers to the alleged basis of Lucy Westenra's resting place in Dracula (1897). However, her tomb isn't listed as Highgate, but a fictional place called Kingstead. See: "Bram Stoker vs Highgate".

Indeed, David doesn't elaborate on the supposedly "local tales" told about the place. I've repeatedly asked for sources to confirm his claims about these stories (one example here), but have heard nothing back. I find it rather peculiar that he'd go out of his way to establish a vampiric connotations for ghostly sightings at the Cemetery, only to turn around and dismiss the existence of vampires.

It becomes even more bizarre, when David admits to the vampire theory's plausibility:

The Ham and High, however, seemed especially interested in the 'vampire' possibility and the fact that black magic had been taking place at the cemetery. On March 6th, 1970, they ran a front page story entitled, perhaps appropriately "WHY DO THE FOXES DIE?" The implication was, was that in some manner the 'ghost' was no less than a 'vampire' which had been responsible for the death of the foxes. It was interesting hypothesis, and one which had not been overruled by the author himself. In fact, I held the view that as the phenomenon seemed definitely malevolent by nature, it was quite conceivable that it possessed sufficient power to have some affect upon 'weaker forms of intelligence's' - such as animals.

There was a reason for the Ham & High's interest in the theory, as I've revealed elsewhere. But I digress.

We now stray into folie à deux territory, when David tries to distance himself from the vampire theory:

Although these remarks were obviously intended to create maximum publicity, in reality, they were based on a misunderstanding of a report in the local Press the previous week when, humouring some over-zealous reporter, I had stated that if the apparition at Highgate Cemetery turned out to be anything like a 'vampire', I, for one, would be prepared to take any means necessary so that everybody could 'rest in peace'.

Yes, despite all his concurrences with the vampire theory (again, one that upheld a bloodsucking vampire was haunting the cemetery), not to mention saying that he'd take precautions against it, apparently, Manchester's remarks were "obviously intended to create maximum publicity"!

He then tries to emphasise the caution he displayed in discussing his sighting for an interview with Sandra Harris, March 13, 1970...

During the interview, and to avoid any possible sensationalism about 'vampires', I took great care to avoid such a term when referring to the phenomenon. Of course, it was realised that local opinion tended to support a 'vampire theory', but I certainly didn't accept the existence of vampires in their strictly commercialised sense and I had no intention of being misunderstood or misquoted.

...which was the same night a mass vampire hunt took place at the Cemetery. Too little, too late. You also have to question David's cautious approach, in light of vampire hunting re-enactments, posing for pictures with crosses and stakes, as well as his comments on another television interview, all covered here.

And guess what? He participated in those after the mass vampire hunt of March 13. Caution to the wind.

The vampire association hasn't stopped. Indeed, he's helped perpetuate it, himself. Take a look at the titles in his booklist, if you don't believe me. The case has dominated so much of his life (despite blaming me, for his continued association with it), that he even named his multi-volume autobiography after it: In the Shadow of the Highgate Vampire.

To put this in perspective, David was 24 when the story broke in the press. On January 23rd, next year, he'll be 65.
Posted by Anthony Hogg at 4:02 PM

Forty years of fights, feuds, foxes, fangs and Farrant. Would make a good film, wouldn't it?

It's certainly got potential...as a sitcom! :D