To justify vampire hunting as part of his exorcistate role, Seán Manchester sometimes claims sanction from the Church. Does the Church actually encourage vampire belief? What have other Church members said about the undead? 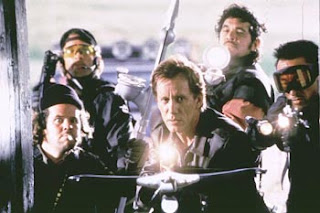 During his interview with Andrew Gough, Manchester was asked "What position has the Catholic Church taken, both publicly and privately, with respect to your work?" He replied thusly:

The Catholic Church has always accepted the existence of such things and the need to deal with them by way of exorcism. I would only refer today, however, to the traditional wing of the Catholic Church in this respect and not the modernist, liberal elements who struggle to believe in the supernatural and question the very essence of Holy Scripture.

Oh really? Interesting. More on that, later. Meanwhile, the Vampire Research Society (VRS) website also incorporates a page on "Vampirological Testimony" featuring thirteen quotes from certain notables on the undead. Let's break these down a bit, shall we? Firstly, it's imperative to reveal that five of these quotes are derived from people who've had some sort of affiliation with the VRS.

The first such "testimony" comes from Life-Member and Associate, Peter Underwood. He wrote and edited The Vampire’s Bedside Companion: The Amazing World of Vampires in Fact and Fiction (London: Leslie Frewin, 1975). It's the same book in which Manchester contributed his account of the Highgate Vampire, on pp. 81-121.

Next up, we have Elizabeth Wojdyla, an alleged victim of the Highgate Vampire. At the time, she was Keith Maclean's girlfriend. Who's he? Oh, just the VRS's former Regional Area Secretary (Fig. 1). He's since been replaced by Robert Finch (Fig. 2). 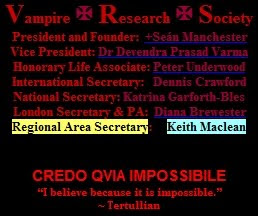 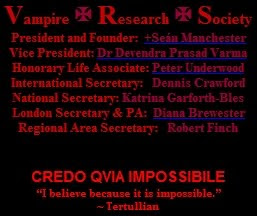 Fig. 2 The current Regional Area Secretary can be viewed on the VRS's homepage.
The next testimony comes from Gothic scholar, Devendra P. Varma. That is, the VRS's Honorary Vice-President, who died in 1994. Interestingly, Jeanne Keyes Youngson, the President and founder of Vampire Empire, alleges that Varma was critical of the VRS, when he visited her Dracula Museum in New York.

The last two of the VRS-affiliated quotes come from the same source. That's right, the VRS's own president President and founder: Sean Manchester himself. In this case, the "testimony" is take from two of his books, that is, The Highgate Vampire (1985, 1991) and The Vampire Hunter’s Handbook (1997).

Before we proceed onto the next part of this investigation, let's get a clear definition on exactly what "testimony" is, in this context. Obviously, the quotes used on the VRS's "Vampirological Testimony" page, are intended to indicate a demonstrated belief in vampires of the people cited, thereby justifying their promotion of the reality of the undead. Thus, the quotes serve as "testimonials". So, let's say that testimony is "is evidence provided by a competent witness."

In the next installment, I'll examine the "testimony" of the other eight people featured on the page and we'll soon get to the heart of the Church's views on vampires.
Posted by Anthony Hogg at 11:44 AM