Looking for work? Got nothing else better to do with your time? Well, a recent vacancy's come up. This could be the job for you! 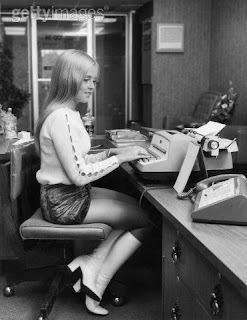 While promoting the second volume of his autobiography, In the Shadow of the Highgate Vampire, David let slip that he's after a new secretary, a role previously occupied by Catherine Fearnley and Patsy Langley:

Which reminds me, I’m STILL looking for a new secretary (but a trustworthy one this time). Anybody got any idea’s? Qualifications not really necessary: except must be female; doesn’t object to working late hours, and making me coffee occasionally (or pouring me a drink!). Other than that, I’m not that fussy!

Well, the byline's David, but apparently, the housemaid-like job description was written by the Vice President of the British Psychic and Occult Society. According to Dave:

PLEASE NOTE EVERYONE!: That comment about my new book and gettiing [sic] a new secretary was NOT written by myself. It was written by Gareth He was reound [sic] here and said he wanted to post something . . . uncensored. Well, as he gave me a lot of helf [sic] with the book, I agreed but it strictly only represents his own opinion – not mine! It is true I am looking for a new secretary, but not in the way he is trying to imply!

I'm guessing Dave could do with an editor as well. If you're still interested in the role, what exactly do you think it'd entail? Apart from fixing David drinks, what would your responsibilities be? How about a testimonial from one of his former secretaries: "WELL AS TO QUALIFICATIONS TO BE BPOS SECRETARY YOU DON'T NEED ANY APART FROM BEING WILLING TO DO MR. FARRANTS DIRTY WORK FOR HIM." Ok, sounds good so far. Anything else?

Well as I’ve previously stated I became involved with Farrant, he didn’t have the use of a computer then as such only a word processor so it was easier for me to do the typing and organise membership cards, newsletters, etc and so forth. Also in and among Farrant asked me to make posts against Bishop Manchester which were of a derogatory nature so he wouldn’t have to put his name to them, all of this I now deeply regret no end. In fact I regret ever getting involved with them in the first place full stop.

If that sounds like your cup of tea, then drop by David's blog. You could probably post your resume (although, you probably won't even need one) in the comments section.
Posted by Anthony Hogg at 4:55 PM

This goes against what he said when he went 'sue me' when he was brought up on this basic piece of sexism on The Supernatural Forum.

Well, to be fair, he does handpass the blame over to Medway, but it's kinda funny that he doesn't offer a correction in its stead...

It gets better as it seems like Patsy is STILL his secretary!

Ah, good stuff! Oh, I noticed something interesting in that post:

"I said I would go if ‘Dennis Crawford’ could be there, but this was meant only as a form of sarcasm as I was well aware that the ‘Dennis Crawford’, who was putting his name to numerous Internet posts, could not be produced as he simply did not exist, except as a name Mr. Manchester was employing."

Yeah, funny he says that, but doesn't mention that Manchester called his bluff!

So, once again, another pitiful excuse to avoid reconciliation, to keep the feud going for revenue-raising and publicity-seeking purposes.

Wow... the perks to this are quite something: late hours, trolley-dolly duties and the distinct possibility of being slagged off over the internet while still in the active role of secretary.