Catherine certainly had some interesting things to say about her past involvement with both sides of the Highgate "feud". She kindly granted my request for a second interview. 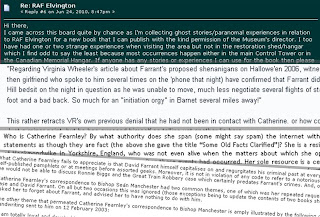 Once again, it was conducted via e-mail. I sent her a numbered list of questions,¹ which she duly responded to.² I've retained her upper case replies, as I did with Barbara Green's responses.

Anthony Hogg: There are frequent claims that the Bishop uses aliases online. Indeed, the Bishop confirms it, but without saying what they are. In light of your background with The Cross and the Stake forum, could you tell us any of them? Conversely, do you believe that Dennis Crawford and Katrina Garforth-Bles are actual personages who use the forum?

Catherine Fearnley: I RECEIVED AN EMAIL ONCE FROM BISHOP MANCHESTER SAYING THAT IT'S ABSOLUTELY IMPERATIVE NOBODY KNOWS IT'S ME WHO IS POSTING ON THESE FORUMS HIS WORDS NOT MINE. I STUPIDLY DELETED THIS EMAIL BUT NOT BEFORE I GAVE MR. FARRANT A COPY OF THIS EMAIL WHICH HE SHOULD STILL HAVE. I KNOW THAT DENNIS CRAWFORD IS A GENUINE PERSON, WHY, BECAUSE ONE NIGHT MR. FARRANT SAID THAT DENNIS CRAWFORD APPEARED AT HIS APARTMENT/FLAT WITH MR. MANCHESTER (AS HE WAS THEN) WHICH TOOK ME BY SURPRISE BECAUSE MR. FARRANT HAD ALWAYS CLAIMED PREVIOUSLY DENNIS CRAWFORD WAS AN ALIAS. I AM NOT TOO SURE ABOUT KATRINA GARFORTH-BLES SO I CAN'T SAY ONE WAY OR ANOTHER.

AH: You mentioned that Farrant asked you to "make posts against Bishop Manchester which were of a derogatory nature so he wouldn’t have to put his name to them". What kind of posts where these? Are they still in circulation, online or otherwise?

CF: YES THIS IS WHAT MR. FARRANT ASKED ME TO DO MAKE POSTS ON HIS BEHALF, SOME OF THESE WILL INDEED BE ONLINE STILL I HAVE KEPT A COPY OF SOME OF THESE POSTS IN A NOTEBOOK THAT I HAD AT THE TIME WHICH I STILL HAVE AND NO I'M NOT GOING TO PUBLISH ANY OF THE MATERIAL ONLINE. BUT HAVING SAID THAT BISHOP MANCHESTER ALSO GAVE ME POSTS TO WRITE ABOUT MR. FARRANT SO THAT HE WOULDN'T HAVE TO LIKE I SAID PREVIOUSLY THEY ARE AS BAD AS EACH OTHER

AH: You wrote a work called The Highgate Vampire and Me. However, I've seen no details of its publication, so could you give us an insight into its general contents? Also, is it true that the manuscript was sent along to VRS-friendly sources and, if so, why?

CF: YES I DID START TO WRITE A BOOK TITLED THE HIGHGATE VAMPIRE AND ME THIS WAS OF COURSE AFTER ALL THE MALICIOUS STUFF THAT MR. FARRANT HAD WRITTEN ABOUT MYSELF, AND HE AT THE TIME SAID HE WAS GOING TO PUBLISH A BOOK ABOUT ME. THE GENERAL CONTENTS WERE ABOUT MY RELATIONSHIP WITH MR. FARRANT, AQUAINTENCE WITH BISHOP MANCHESTER, THE WHOLE HIGHGATE THING AND OF COURSE THE ROBIN HOOD NONSENSE THE FULL WORKS. I SENT THE BOOK TO VRS BASICALLY BECAUSE BISHOP MANCHESTER WAS GOING TO BE MENTIONED AND ALSO I WANTED TO CORRECT ANY OF THE DATES/TIMES EVENTS AND TO GIVE BISHOP MANCHESTER THE CHANCE TO ALTER ANYTHING OUT OF PURE COURTESY. THIS WAS NOT OF COURSE GOING TO HAPPEN TO MR. FARRANT WHO HAD ALREADY MENTIONED HIS BOOK THAT HE HAD WRITTEN ABOUT ME.

AH: You believe that the Highgate Vampire Case was a hoax. What motivations do you think its primary participants had in creating it? Do you think there was any collaboration between its two main sides at any point?

CF: I HAVE ALREADY SAID PREVIOUSLY WHY IT WAS A HOAX, BASICALLY BECAUSE ALL THE EVIDENCE STEMS BACK TO THE TWO MAIN INSTIGATORS, NO INDIVIDUAL PERSON HAS COME FORWARD, I ALSO BELIEVE THAT BISHOP MANCHESTER HAS TAPES/CD'S WHERE MR. FARRANT CAN BE HEARD DISCUSSING THE HOAX IN GREAT DETAIL, I HAVE HEARD SOME OF THESE INTERVIEWS AT SOME TIME OR OTHER.

AH: What twigged you onto the idea that the Case was a hoax at all? When did you start suspecting something was "fishy" with either side?

CF: COME ON HOW MANY PEOPLE DO YOU KNOW CLAIM TO HAVE SEEN VAMPIRES CHANGE INTO GIANT SPIDERS, APPEAR AT GATES WITH RED EYES AND APPEARS AS A MISTY SHAPE THAT DRAINS ENERGY. RUBBISH.

AH: After your role as Secretary for the BPOS was terminated, you were replaced by Patsy Langley, the author of The Highgate Vampire Casebook Files (2007). Did you have any interaction with her prior? If so, do you think she's a suitable replacement? What qualifications do you think one needs to be a BPOS Secretary?

CF: YES PATSY AND MYSELF WERE FRIENDS AT THE TIME OBVIOUSLY THINGS DIDN'T WORK OUT I WILL NOT GO INTO PERSONAL DETAILS HERE. IT DOES NOT MATTER ONE IOTA IF I THINK SHE IS A SUITABLE REPLACEMENT OR NOT, SHE'S WELCOME TO IT. WELL AS TO QUALIFICATIONS TO BE BPOS SECRETARY YOU DON'T NEED ANY APART FROM BEING WILLING TO DO MR. FARRANTS DIRTY WORK FOR HIM.

AH: Shortly after our first interview, you were targetted by the FoBSM. As was I. Do you think this shady group does more harm than help for the Bishop? Do you think he should be more vocal about their actions?

CF: I THINK THAT THE FOBSM ARE INDEED A DANGEROUS GROUP AS ARE THE VAMPIRE RESEARCH SOCIETY AS ARE THE BPOS. BUT THE FOBSM DEFINITELY DO MORE HARM THEN GOOD AND IF I WERE BISHOP MANCHESTER I WOULD WANT TO KNOW WHY ASSUMING OF COURSE HE ACTUALLY CARES ABOUT THE PEOPLE THAT ARE BEING TARGETTED.

AH: You've left the Highgate Case behind you. Do you have any other projects on the boil? Are you involved with any other organisations?

CF: YES I'VE WELL AND TRULY LEFT THE HIGHGATE CASE AND IT'S PARTICIPENTS WELL AND TRULY BEHIND. I HAVE COMPLETED A BOOK ABOUT THE HISTORY OF RAF ELVINGTON AND HAVE ONE IN THE PIPELINE ABOUT GLENN MILLER THE FAMOUS BIG BAND LEADER OF WORLD WAR 2. THE ONLY ORGANISATIONS I'M INVOLVED WITH AT THE MOMENT ARE TO DO WITH CHURCH AND I'M ALSO A MEMBER OF YORKSHIRE AIR MUSEUM, PLUS DOGS TRUST AND OTHER CHARITIES WHO NEED VITAL SUPPORT

Once again, I'd like to thank Catherine for her participation with these interviews, especially as she's "held the peace" on her involvement with the feud for a few years.

Now, some notes on content. Dennis Crawford and Katrina Garforth-Bles serve as the Vampire Research Society's International and National Secretaries, respectively. They're also moderators on The Cross and the Stake. Regarding the FoBSM targeting Catherine and myself, that's dealt with here and here. I've also (briefly) discussed Patsy Langley's involvement in the British Psychic and Occult Society.