I don't usually discuss the Kirklees Vampire Case on this blog, but the latest rumblings of a proposed "investigation" are notable for their sheer audacity.
On April 22, 1990, Sean Manchester conducted an "unofficial vampire hunt" at the Kirklees Hall Estate, to determine the source of alleged supernatural phenomena reported in the area. He had previously requested permission to hold a "vigil" on the grounds from its owner, Lady Margarete Armytage. When this wasn't granted, he proceeded with the hunt, anyway. This act was subsequently watered down by the Vampire Research Society.

Nearly 15 years later, the site was trespassed by another group. It was lead by Barbara Green, president and founder of the Yorkshire Robin Hood Society (YRHS). Also present were Catherine Fearnley, Gareth J. Medway and David Farrant, the Society's Patron. Their intent: to "conduct a full-scale exorcism at the grave". This occurred on April 20, 2005.

So, what's the Robin Hood connection? The grave in question is (allegedly) the last resting place of the legendary outlaw. However, the evidence for this claim is incredibly flimsy (see: here, here and here). Yet, it's not Robin's ghost who's meant to haunt the area, but a "wicked prioress" who (allegedly) bled him to death at Kirklees Gatehouse, nearby. Historical record is noticeably silent on this (alleged) murderess.

Back to the "exorcism". What's the connection between this spectre to the grave? Sightings of a strange apparition have been reported there, and according to Farrant, Green, herself, actually witnessed it "pointing" at the tomb. Armed with this "proof", the following rationale and course of action took place:

Stories and controversy continued to surround the grave until, in the latter part of 2004, the Yorkshire Robin Hood Society decided that perhaps the best way to 'quiet' the restless phenomenon said to haunt the grave, and to thereby put at rest the fears of many local residents in the process, was to conduct an official exorcism at the gravesite to dispel the malevolent force - or forces - there.

The nature of this "malevolent force" has wavered over time. Indeed, despite Farrant's dismissals of the vampire hypothesis in the same article, Green previously gave it some serious consideration. At one point, after Manchester offered his patronage to the YRHS, he had proposed a vampire theory to her, concerning Robin Hood's death. When she was interviewed by Rosemary Ellen Guiley for Vampires Among Us (New York: Pocket Books, 1991), she told her that "it seemed worth pursuing" (129).

Indeed, the book also relates a visit Green made to the tomb with "a small band of like-minded friends, dressed in period costumes from Robin Hood's day" in April 1990, where they found "the body of a goat with its throat torn open, which they took as another sign of something evil afoot" (130).

Clearly, the prospect of "something evil" at the site has long influenced the YRHS's so-called "investigations" of the tomb. Their desire to dispel it, has even lead them to breaking the law. You see, none of the visits to the tomb were authorised by the property's owner, Lady Armytage. The "full-scale exorcism" of April 20, 2005, was also unauthorised as Barbara boasts (see May 23, 2010 at 07:02 comment):

Local people have always gone up to the grave so finally that is what we did. When we heard all the posh or “important”people were allowed access of course we were miffed. So okay we did get a bit infected with the spirit of Robin Hood–it was exciting trespassing and we felt we had a right to show our respects, even if some people deny his existence there are plenty of other bodies on the hillside, outside the consecrated grounds of the nunnery.

Yet, the "respects shown" mainly consisted of an hour-long pagan ceremony conducted by Medway, in which he invoked three ancient Greek goddesses: Athena, Hecate and Themis. Did any overt manifestations of supernatural activity occur while this ritual was performed? Here's what Medway reported: "What I did notice was that, when I arrived, I felt very cold and my nose kept running, but that after the ritual I did not notice the temperature at all." David elaborates on this seemingly unnatural coldness in the same article:

This group, accompanied by some others, met at the grave site at around 7 p.m. - several of them having approached from different directions to avoid suspicion from one large group of people travelling together.

It was a forlorn evening; not too cold, but a stubborn 'dampness' pervaded the atmosphere. As well, all observed a distinct 'coldness' that seemed to encompass the actual grave within an area of two feet or more. Thermal readings confirmed this, but compass alignments reacted unpredictably - although the latter could have been caused by the old rusty railings that surrounded most of the grave.

The need to "avoid suspicion" was necessary, of course, because they were trespassing on private property. Another explanation for the mysterious cold and "dampness", which is unexplored in David's report, is the actual location itself. Here's a picture of the tomb. See if you can work out why these atmospheric conditions may have been present during the "fast approaching darkness": 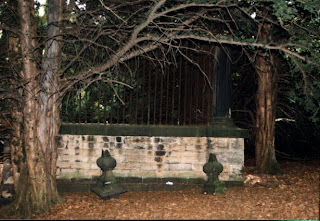 One also has to question the "respects shown" when you realise that this ritual was also filmed for an intended documentary. As Barbara's chronology reveals, Red Monkey had approached the YRHS in 2004, requesting an interview for an upcoming feature. The film's still in post-production, which Barbara believes is part of a conspiracy to stifle her Society's efforts (note her comments under username "damiana").

In the next instalment, I'll discuss current plans for another venture to the gravesite.
Posted by Anthony Hogg at 3:06 AM