Catherine's not the only one who's been on the receiving end of unsolicited FoBSM mail. Yep, I have, too. 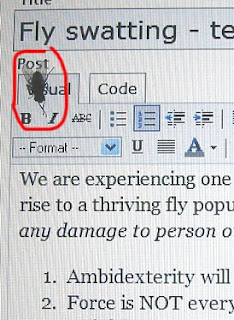 Sometime ago, I told 'em, "I'm not interested receiving any more of your regurgitated junkmail in my inbox. Now go harass someone else" ("Re: Shroudeater Lies! - Rob Brautigam's False Allegations", Friday, 16 May 2008 4:10 PM). I subsequently blocked their address.

I guess they found a hole in the system, in the wake of a recent configuration of my e-mail. As a result, they managed to send four e-mails, all spaced mere hours apart.¹ All concerned my recent interview with Catherine, but none of them were signed with an actual name.

Apart from the bombardment itself (not the first from Manchester sympathisers), there were two even more bizarre things I noticed about the e-mails. Firstly, they were all forwarded correspondences with Catherine. Second, none of them actually addressed me. That is, no "Hi Anthony". No lead-in. Just a bunch of correspondence they'd passed on. Needless to say, their address has been re-introduced to my block list.

At this point, I think it's a pretty safe bet that Catherine didn't give 'em permission to send along personal correspondence (I'll double-check with her, to make sure), so, if not, they obviously don't give a toss about distributing private info. Like, say, her e-mail address, which was incorporated into the responses. If they're willing to forward such things onto me (and I'm not sympathetic to the FoBSM "cause") then, who else are they forwarding it onto? Who knows? And that's the problem.

Outside of this so-called "informal group", the Vampire Research Society (which the Bishop presides over and founded), has shown the same capacity for passing along personal info. Indeed, only one of the FoBSM e-mails I've received over the years has been signed by an actual person: Dennis Crawford.² That is, the same guy who serves as the VRS's International Secretary.

And what should we make of the Bishop's Holy Grail Church website containing items that the FoBSM regurgitates elsewhere? Just how "informal" is this veritable fan club, when it has the object of its affections serving as an admin on its Facebook group? Makes ya wonder.

Anyway, in my view, the Bishop's namby-pamby attitude to these "Friends" actually makes him look worse. Think about it: you've got a bunch of nameless stalkers, who hand out personal info like candy. They have no clearly-defined purpose ("an informal support group who act in the bishop's interest as they perceive that interest to be"), yet provide seemingly intimate recounts of the Bishop's version of events, without the authority to directly speak on his behalf. Sad.