Vampires: Demons in the Sack

I briefly discussed the semantics David employs regarding vampires, in the previous post. It's time to explore his unusual, alternative interpretation of vampiric phenomena. You'll see that vampires aren't outside his supernatural worldview. 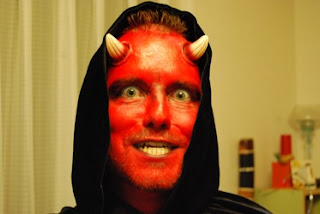 Time and time again, David will insist that he doesn't believe in vampires, despite his association with the Highgate Vampire Case. However, he's particularly keen on emphasising his dismissal of the bloodsucking variety. Here's what he has to say on the matter in his interview for International Vampire Magazine:

I do not believe in "vampires" in the commercially accepted sense of the word ... i.e. physical figures or entities that go around draining victims of their blood in order to ensure "life everlasting".

There are two problems with his dismissals. Firstly, the "commercially accepted" use of the term, vampire, has historical and folkloric origins. It was introduced into the English language via an article published in the March 11, 1732 edition of The London Journal. The article covered an outbreak of vampirism in Serbia. This case popularised the Western concept of vampires, which is still used today.

However, writers and commentators soon saw the metaphoric applications of vampirism. Thus, the vampire could also be used as a political allegory, a reference to greedy people and a term for sexually voracious women.

The vampire was also given "new life" by occultists eager to distance it from its folkloric and historical status as an undead corpse, while retaining its supernatural element, to give themselves a "rational" edge in a post-Industrial society. Their alternate theories held that vampires were actually living people or discarnate entities that derived their sustenance not from blood, but from our vitality, or lifeforce. It was used to explain a metaphysical dilemma: how could a vampire transport a physical substance (blood), yet materialise in a grave under six feet of soil, without breaking the surface.

And now we arrive at the second problem with David's bloodsucking vampires dismissals. Despite his keenness to avail himself of the vampire tag (except when selling merchandise), it's clear that not only does he use the term himself, but he also believes in a variant of the vampire espoused by occultists, introducing an largely found in Medieval lore.

After yet another dismissal of the "Hammer Horror" style vampire, this time in an interview with Andrew Gough, David was asked "So, what are vampires then?" Here's his reply:

OK, fair point; just thought I’d mention it! So what are vampires?

Good question. Right, so I will tell you how the vampire legend was born. I assume most people have heard of the legend of the incubus and succubus?

Andrew responds with "Why yes, I believe most have." In case you haven't, an incubus is "a demon in male form who, according to a number of mythological and legendary traditions, lies upon sleepers, especially women, in order to have sex with them." The succubus is its female equivalent. And now, back to Dave:

Well, what is interesting is that they are said to visit people in their sleep, and the symptoms exhibited by these people – these victims, as it were - are invariably the same as those of vampire victims. People wake up for no apparent reason and are paralysed, and often report a pressure, as if someone is kneeling on their chest. I had a German girl visit me in 2001, and she was in quite a state. She had visitations at night and, like many victims, appeared to lose her appetite and, in this instance, the girl was anaemic and required iron pills from a doctor. Still others develop an aversion to bright lights and start sleepwalking; all characteristics of vampire victims. Furthermore, a lot of these people actually report a sexual element to the visitation. Sexual communication between the visiting entity and the person is very common.

At this point, you might think David was gearing up for a scientific explanation of this phenomena, especially in light of his harsh attitude towards people who believe in the bloodsucking variant. You'd be wrong.

Andrew continues his line of query with "We are back to the chicken and the egg again. Where do the legends of incubus and succubus come from, then?" David responds thusly:

Yes, but that quotation might be truer than you think you know! You see, I have often answered this point in my writings that ‘what came first’ was the consciousness or ‘life force’ that created and then formed both of these. This is perhaps not so irrelevant if you think about it, because psychic energy (like the incubus and succubus that you have mentioned) could operate in a similar way. It is neither ‘formed’ nor reproduces itself in human terms. In fact, reports of these entities date back for centuries and are world-wide.

The moral of the story is: when investigating this Case, don't take dismissals at face value. Explore the semantics of what's being said. Unravel the attacks. It's clear that the war being fought between Dave and his opponent is one of interpretation: bloodsucking vampires vs. "vampire-like" psychic entities, not science vs. supernatural or superstition vs. reason.

And in case you thought that Dave's take on vampires is simply a personal view, note that he's also applied it to the Highgate Vampire itself. Here's another extract from his interview with International Vampire Magazine:

Why was I inclined to admit or suggest that this particular entity or phenomenon pointed towards being "vampirical"? ... Well, during the course of the investigation it came to light that at least two independent people had been physically attacked by some unknown person or entity whilst they were passing the Cemetery late at night.