Was Highgate Cemetery homes to ghosts, bogies and beasties over 140 years ago? Time to examine claims made by David Farrant. 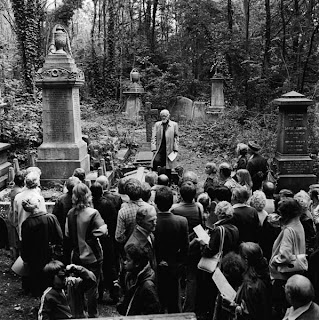 He maintains that 'in the late 1960’s/70’s . . . wide reports began coming into the British Psychic and Occult Society about a "tall dark figure" with "hypnotic red eyes" that had been sighted in and around London's Highgate Cemetery', offering precious little evidence to that effect. Indeed, not only were early reports often contradictory, but the description does not even match his original sightings.

This attempt to link a dubious 'past tradition' to the cemetery was expounded in an article he wrote called, 'Invoking the vampire', New Witchcraft, vol. 1, no. 4 (1975). During the course of his alleged investigation,

Some interesting facts came to light. Firstly, it became apparent that stories of an apparition in Highgate cemetery had by no means begun with the then current sightings. Indeed, similar tales dated from the Victorian Era and interestingly enough more of them had "vampiristic" connections. One of the common tales of that time told of a "tall man dressed in black" who used to disappear mysteriously through the cemetery wall (p. 34).

On the same page, he also discussed a famous 'witness' to this phenomena: 'That Bram Stoker was influenced by the Highgate Vampire when he wrote "Dracula" . . . is almost certain.'

How Farrant obtained this information is a mystery. After all, there appears to be no contemporary record of such tales told in association with Highgate Cemetery. I asked him for his sources on The supernatural forum (the Highgate section is password protected as of this writing), only to be confronted with nonsensical and evasive replies like this:

All you are doing here, Anthony, is just 'cut and pasting' your own questions, yet again!, most of which I have already answered in the past - many of these to you directly. For example: I have answered the question about the ghost sightings and how many times these occurred (and to whom) in detail near the beginning of this thread in my answer to the bogus "Vampire Research Society" - in fact the product of just one person, and one person only.

As I had to point out, several times, he had no answered questions regarding sources for his Victorian era claims. Indeed, his nonsensical claims were undermined by his partner, 'Della Vallicrus', who took also took up the conversational thread I was pursuing by asking, 'Also - I would also be interested to hear about pre-1969 sources, oral or otherwise, regarding the "ghost" or "ghosts".'

However, he wound up brushing off her query, too: 'Of course, I will Della. But it cannot be this precise moment. I have three people coming later, and I am not even half ready yet. I still think the allegations about the Ham&High letter and demands for "proof'' about the ghost's Victorian origins and comparatively trivial being based mainly on wild speculation by only a couple of people.'

It would soon become clear that Vallicrus' heart wasn't really in pursuing this lead. She'd later write, 'I know, that the entity he describes is real. Descriptions may vary. So what? This is not a stone-tape esque image from the past. It is a living, metamorphosising being, in a sense. David saw it. Others saw it. Others have seen it since. But in a strange way - if y'all want to pretend or hope it was a hoax - get on with it.'

I continued pursuing this angle, even engaging Vallicrus in discussion on the side, only for Farrant to pipe in with a decidedly warped view of our exchanges. He also offered a new 'validation' for not answering my (and, by default, her) queries:

You are now even ‘switching’ your personal obsession onto Della, just because she does not happen to agree with your own interpretation of the 1960 sightings. The only reason I have not answered Della’s question about Victorian sources now despite saying I would is simply because to do so would be to effectively answer yourself, when I have just explained why I will not do so. But rest assured, the ‘sources’ you are trying to dispute DO exist, and both Della and myself have examined them …

Yet, at no point did Vallicrus make any reference to examining these alleged sources. Indeed, as of this writing, she's yet to 'speak up' about them. It comes as no surprise that direct citations to the material are carefully avoided in Farrant's reply, which I'd call him out on:

Telling me the sources exist is not the same as stating what they are. I'm not asking you to prove the entity existed. I'm asking you to prove that there was a recorded history (from the Victorian era) of its 'existence', whether it be oral tales, books, articles, whatever...especially when a named person (Bram Stoker) is involved.

I should've been more cautious in providing a leading comment like 'whether it be oral tales, books, articles, whatever', but I needn't have worried, as he continued to evade providing any sort of reference. Instead, he made a vague offer to share his sources if I would discuss my Christian views on ghosts (?!): 'You have had my answer, i.e. that when you are prepared to explain your views here simply - and without further prevarication - I may then take up your repetetive [sic] question about "Victorian sources".'

I knew this was another ruse. After all, we had already discussed my views on the matter several times on the same forum, not to mention previous interactions on Arcadia. Nonetheless, I took the bait and provided an extensive answer on 11 July.

As of this writing, he has not replied. Therefore, the question still remains: do such sources exist or are we dealing with a manufactured history to 'validate' relatively recent claims? The jury's out, but my request/offer for him to provide sources still stands.
Posted by Anthony Hogg at 12:15 PM