Considering the timing, looks like someone's been getting a little touchy with my recent querying.
Some pathetic wanker - using my Blogger profile, no less - left the following comment on Jamie's blog:

Yes, I cite my sources and ask for proof. Yes, I am a pendant with an attention to detail. I thought that was obvious from the content of my blog! Big surprise, there. But if that's the best sly 'criticism' they can hurl my way, I'll happily grin and bear it. Interestingly, the 'OCD-incited ramblings' are eerily similar to what I recently covered in former critic, Gerard de Saxo's, comments. So much for originality.

Here's another example of their 'wit'. 'I' (the character is named 'Cousin Hoggy', 'Manchester's Australian cousin') am shown as ascending to Heaven after being butchered for a Farrant-Manchester Christmas dinner (a nod to the aborted Christmas dinner proposition). See how they've ingeniously literalised my surname to depict me as an actual pig. Bravo! 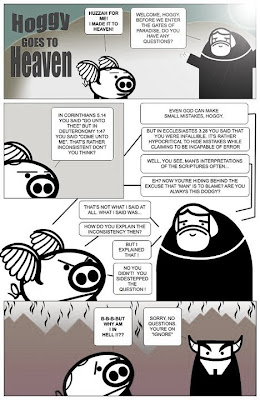 It began in 2007. Initial strips were published on JREFF like a shiny new bauble, to distract fellow forum members' criticism of his Farrant's spurious claims. Its creator was a forum member named 'CLD'. The same guy who warped the content of a private exchange I had with him, to publicly proclaim that I was actually Manchester in disguise. A pretty good 'disguise' on my part, considering I live on the other side of the world and have never even met the guy. Hell, I've never even been to England.

The worst part, however, was that CLD didn't tell me he'd written that article. I found out about it from the shadiest sources imaginable: FoBSM. If they hadn't e-mailed me about it, I would've had no knowledge of CLD's 'campaign' against me.*

Despite that CLD's subsequent ban for violating StripGenerator's copyright (karma, bitch!), Farrant went onto publish the a 12 page collation of the comics that same year, through his vanity press, British Psychic and Occult Society under the false pretext of 'free speech'. I say 'false pretext' because free speech is not something he adheres to. The ludicrous 'preserving free speech' justification was easily dismantled on the very same forum he originally used to promote the comics.

His latest anti-Manchester franchise (after publications such as Man, Myth and Manchester, also through BPOS) was just another manifestation of his vendetta with Manchester - with intent to cash in. I'm not kidding about that. Farrant's paraded about in a 'Bonky' t-shirt, promoted and discussed his involvement with 'Bonky' spin-offs ('I have some say in its production as I am really one of the main stars in it'**) and teamed up with 'John Baldry's Cat' to sell 'Bonky' mugs. Despite these efforts, he doesn't seem to be raising much cash off it, otherwise, surely, he'd be able to afford a comb, shampoo and maybe a haircut by now. Seems he's just happy to fuel the 'hate'.

Clearly, due to my criticism, I've become a 'target'. But aligning me with Manchester is both pathetic and stupid, considering that I also criticise his claims and dodgy practices, too. Surely, they should pay better attention to the 'house divided against itself, can not stand' analogy. I'm also on FoBSM's 'hit list', and Manchester, himself, has previously launched a copyright claim against me, when not saying - and encouraging - some vicious commentary about my good self.

Even as far back as 2006, attempts were made to shut down my forum. When that didn't work, they later went after my Windows Live Spaces blog (succeeding, to an extent), which is the main reason I started this blog, in the first place. They even had my website shut down. Yes, I actually used to have a website.

Despite knowing this stuff, they still think - somehow - that I'm one of Manchester's cronies. Talk about desperate.

I guess these are the 'OCD-incited ramblings' fake Anthony was talking about, eh? Ha! That said, my readers certainly like coming back for more, so I'm cool with that.

Anyway, I'm happy for them to have a go at me for 'OCD' habits, because it means they can't devalue the content of my criticism. They can't dismiss the issues I raise. Can't rebut them. That works in my favour, if anything.

What I do find objectionable, however, is the hijacking of my name. Using my Blogger profile to post stuff on 'my' behalf? That's pretty fucked up. Weirdly enough, Farrant also e-mailed me recently asking whether I'd written the content of an MS Word document, that had apparently been sent to him by 'me'.*** How are such acts any different from what this knobend was doing? At least, in his case, he was trying to mark himself out as a different person, even to the point of delusion. You know, a guy playing for the 'opposite' team.

But how 'opposite' are they, really, if they employ the same kind of tactics against me? As Nietzsche said: 'When you stare into the abyss, the abyss stares back into you.'

* Incidentally, same goes for the later comics depicting me. My attention were drawn to them by 'Vampire Researcher' (a VRS affiliate - or Manchester, himself, depending who you ask - on The supernatural world forum), who showed me the comics and revealed nasty depictions of myself on Farrant's Facebook page (which Farrant had blocked me from viewing). Talk about 'friends in low places'!

** Since when were the 'targets' of 'satirists' meant to be directly involved in the satire? Lolz. But by that logic, it's kinda strange I wasn't invited as an 'adviser', considering that I'm one of its 'star's, too: 'You should hear the voice given to Hoggy and the ‘Bonky one’. Hilarious is not the word for it!' On that point, we can probably agree.