Last year, I set up a poll asking readers whether or not they believed in the Highgate Vampire and if they thought Sean Manchester or David Farrant were credible witnesses. It closed on 19 July 2011, 11.59pm. Here's the results. 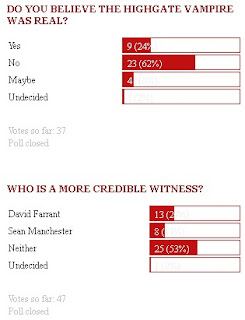 After years of delving into this thing, I started wondering what other folk thought about the case. That intent also kicked off my postings on The supernatural world forum. Still going strong.

I should clarify that this ain't science; it was born of genuine curiousity. It's good to take a look outside the box, sometimes. I don't know who voted and I don't know how many times they did, so the results can only speak for themselves. I can say that they couldn't select multiple answers, though.

The first question, 'Do you believe the Highgate vampire was real?', giving voters the option of 'Yes', 'No', 'Maybe' and 'Undecided'. It received 37 votes. Let's break 'em down into delicious Microsoft Excel pie chart form: 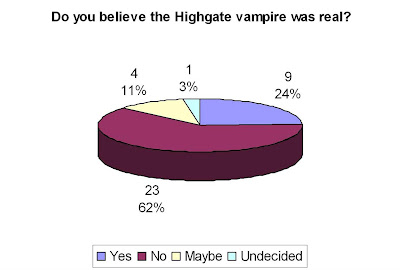 Let's take a look at the second poll. I asked, 'Who is a more credible witness?', namely, whose testimony do you find more reliable. I stuck to the main players, so the options were 'Sean Manchester', 'David Farrant', 'Neither' and 'Undecided'. This one scored more votes (47), perhaps because it was less ambiguous than the first. 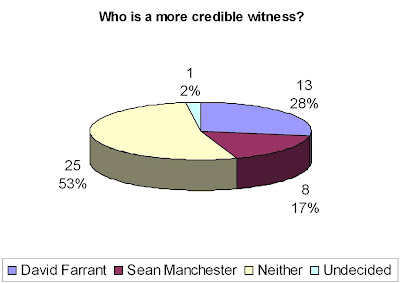 One undecided (2%), eight for Manchester (17%), 13 for Farrant (28%) and 25 neithers (53%). That means slightly more voters believed in Farrant's version of events than Manchester's, but the majority thought neither of them were credible. I'm not overly surprised by that outcome, either.

Thanks to all who voted! It's certainly interesting getting 'outside' feedback and we, at least, know it wasn't overridden by supporters of Farrant and Manchester as I anticipated it might've been.
Posted by Anthony Hogg at 2:45 AM