Notes on a hatchet job

As part of their hatchet job on me, the FoBSM used private correspondence from 'Vampire Researcher' to a forum member named 'Gerard de Saxo'. What they haven't noted, are some of his follow-up remarks. 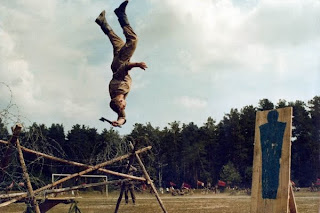 Before reading about it in their blog entry devoted to myself, I hadn't really interacted with de Saxo who was a background presence to our forum debates. Nonetheless, after being 'filled in' behind-the-scenes by 'Vampire Researcher' (a VRS member), de Saxo had this to say about me:

I spent (or rather wasted) a good couple of hours going through Anthony’s blog. Wow – The poor man is utterly comsumed by every little detail, most of it is nothing to do with the original case or anything remotely paranormal. I get the feeling he is trying to garner a reputation purely on the back of stoking the feudal fire. Perhaps he has OCD or something, but he needs get a grip on things.

Let's say it was a bit of a shock seeing his 'assessment' of me with no real prior interaction. Nonetheless, de Saxo's had a change of tune since:

I have only seen the one where private emails between myself and "Vampire Researcher" (concerning Mr Hogg's blogs) suddenly appeared. I did not grant "Vampire Researcher" permission to publish these and I had to contact Mr Hogg to explain. If there are others could you kindly put a link in here or contact me privately and I will take a look. I still think the Bishop was given a hard time by certain posters here, but I'm no longer blinkered and can certainly see his faults now! His conduct has been pretty poor to be honest and I can understand how Mr Hogg felt when attempts to puiblish his address appeared.

Although he didn't revoke his comments about me attempting 'to garner a reputation purely on the back of stoking the feudal fire' or his diagnosis of 'OCD' in his post, it's certainly a lesson in why both sides of a story should be heard before passing judgement.

And speaking of releasing personal addresses, FoBSM's latest blog entry - a missive against one of Manchester's former friends - is threaded with links to the accused's home address (while cowardly hiding behind a collective nom de plume).

The tragedy of the FoBSM, is that they probably think those malicious tactics are a good thing...even though they're 'representing' a Christian bishop. Instead, such gestures can only continue tarnishing Manchester's reputation, especially while he lurks in the background.
Posted by Anthony Hogg at 1:52 PM