I've been sharing the adventures of Contradiction Man (episode 1; episode 2) on Facebook, including the Highgate Vampire Society group.
However, David saw fit to delete links to it. Here's how it's gone down: 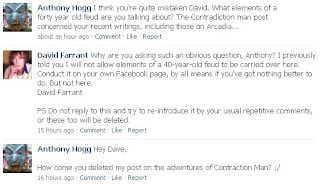 Of course, the laughs don't stop there. You see, in censoring my links, all he's done is (that's right) contradict himself. Again!

It is a matter of public record and should thus be open to continued input and debate, and not one that should not be allowed to become clouded or influenced by any who have no knowledge of events (which they certainly do not ‘own’) as these actually occurred or happened. There are many such persons around (including sensationalistic authors and members of the Press) but their stories should really be shared in total, and not be allowed to become ‘dictorial’ in the sense that these necessarily represent the public view of things. [emphasis added -ed.]