"Demonologist" aka TFO, recently posted a comment to "Discussing Public Figures on LiveJournal".
I'll now take this opportunity to respond to his ramblings:

I am personally acquainted with Bishop Seán Manchester and have been for some considerable time.

Oh really? In what capacity would that be? His International Secretary, by chance?

He is exceptionally learned in the field of demonolatry, especially vampire lore, and has given talks and lectures about these topics for four decades, having contributed to radio, television and film productions over the same period.

And still continues to do so, despite being publicity shy.

His works in print are among the most popular non-fiction books about vampires and vampirism to be found anywhere. The Highgate Vampire is probably his best known.

That's hard to determine, really. I mean, the VRS (you author/copy-n-paste a blog under their banner) still hawks his books at every available opportunity which is interesting, considering that The Highgate Vampire (I'm almost certain you're referring to the second edition) was published in 1991. His other non-fiction work on vampires, The Vampire Hunter's Handbook, was published in 1997. You guys must have a lot of leftover copies.

Therefore, I take offence to the suggestion that Bishop Manchester has ever harassed anyone when, in fact, plenty of people have taken it upon themselves to harass and stalk him.

I find this a little amusing, considering the tactics the VRS (Manchester is their prez) employ, themselves. The FoBSM are no better.
Firstly, if you want an example of obsessive blogging, check this out. Secondly, you're obviously referring to David Farrant; a guy who leaves such a bitter aftertaste in your mouth, that you can barely bring yourself to say his name.

An American by the name of Alex Lucard has been obsessively blogging about Bishop Seán Manchester for years, employing calumny from the usual source, ie a man convicted for tomb vandalism and desecration in Highgate Cemetery during the 1970s who was sentenced to four years' eight months' imprisonment; someone who has done nothing more with his life than pursue malicious vendettas, most particulary against Bishop Manchester, and someone who views the bishop as his arch-nemesis regarding the Highgate Vampire case.

Also, if you think David, alone, views Manchester as his "arch-nemesis", then how do you explain this. And this?

Alex Lucard, whose issues of transparent envy might stem from the fact that he is a horror film fan, makes the unsubstantiated and absurd claim that because his self-advertised surname and initial - "A Lucard" - spell "Dracula" backwards Bishop Seán Manchester must therefore inevitably be stalking him with view to driving a stake through his heart!

Or he could have been joking? After all, his blog - Icon. Showstoppah. Main Eventah. - makes several jokey references to getting staked. And not all in association with Sean Manchester, at that.

Only a a very silly youngster with an obsession about such ideas could dream up something like that!

Or, a silly old bugger unsavvy enough to take him literally!

Bishop Seán Manchester has not “stalked” anyone, least of all Alex Lucard whom he does not know, has never heard of and, if he had, would not be remotely interested in. Why would a celebrated English author and consecrated bishop be interested in someone thousands of miles away in another country with a penchant for asininity?

So if Manchester wasn't aware of Lucard...then who reported his blog to LJ Abuse? How could a faceless, non-entity be behind the closure of a blog if the person it "maligns"...didn't even have any awareness of it?

Lucard, in actual fact, has a history of stalking Bishop Seán Manchester on the internet, not the other way around.

Prove it. Let's see where Lucard has "stalked" Manchester.

Apart from a similar rebuttal (probably made by me), you will find no mention of Alex Lucard on any of Bishop Seán Manchester's boards and forums. You will, however, find plenty of mention of Bishop Seán Manchester on Alex Lucard's multifarious websites where convicted UK felon David Farrant often inserts his libellous abuse and malicious falsehood when Lucard is not repeating it himself.

Yes, I've seen your spiel about Lucard reiterated/copy-n-pasted elsewhere. Most notably here, here and here, with very little variation in between.

Why is Lucard so obsessed with Bishop Seán Manchester? That, I suppose, is strictly something for Alex Lucard and his psychiatrist to work out.

The question is, why are you obsessed with Lucard? After all, you aren't Manchester's rep - at least, this is something you won't presently divuldge. As I've pointed out, you've posted extremely similar posts on Lucard, elsewhere. If Manchester doesn't even have any awareness of this man, then why are you fanning the flames?

However, if you want to know why Lucard is "obsessed" with Manchester, you could check out his side of the story here, in which he also notes: "Eventually though he [Manchester -ed.] decided to play nasty. He would complain to LJabuse that his name was showing up in my LJ and that it was an invasion of his privacy."

Strange actions for someone unaware of Lucard.

All I hear is talk about what this or that misfit is threatening to do against Bishop Seán Manchester - usually from the safety of another country and always with the culprit hiding behind a computer. Nothing ever happens, of course, because these people are cowardly non-entities trying to steal some limelight for themselves by making false allegations and fabricating nonsense in order to ride briefly on the coat-tails of a much admired figure in England who is not even aware of their existence.

So, again, why are you drawing attention to them? You follow a blog dedicated to David Farrant.

As to "hiding behind a computer", that's pretty rich for someone (yourself) I've exposed multiple times as a plagiarist (as has an actual vampirologist) and user of different aliases.

You've previously ripped-off my username, falsely accused me of ripping it off you, started a blog that rips its title off mine (and my forum)... You're hardly an innocent yourself.
And now what are you doing? Firing off potshots at someone (Lucard) - from the "safety of another country" (i.e., the UK) - all the while hiding behind your computer, also. Such blatant hypocrisy.
Oh, by the way, it's really a nice touch to see that you follow your own blogs!: 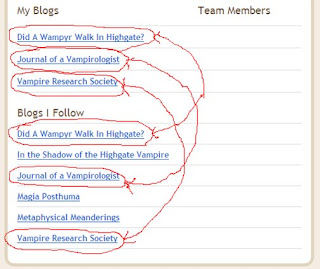 Trying to bolster your "readership"?