I last recounted the saga of the Bishop's attempt to hide the fact that he pilfered material from BNP sources in "About Friggin' Time".

Once again, he's pared-down what I actually wrote into one, handy bite-size sentence, this time editing it (and his reply) into the same post:

If you have "no faith in the political system", then why did you choose to comment on a political figure? - Anthony Hogg, Australia.

Rather than address his plagiaristic ways, he merely alludes to the sources in question:

The "political party with a view on the topic not dissimilar to my own", of course, is the BNP.

Also, it's one thing to draw one's "statistics and some other information from elsewhere", it's another to blatantly copy-n-paste them, sans attribution.

When a reader asks for the Bishop's opinion on an issue, then surely said reader would expect the opinion to be the Bishop's own, not something blatantly cribbed from other people's writings.

Further down his post, the BNP finally achieves some acknowledgment - but maybe not in the way you'd expect:

To his credit, Benedict XVI has spoken out against unfair legislation from Europe which will soon not allow British churches to discriminate against the appointment of homosexuals and transsexuals. All the political parties are too liberal on these matters (and I include small parties like UKIP and the BNP) because the law forbids them to be otherwise.

Of course, I'm not gonna let him get away with it that easily. Here's what I wrote back: 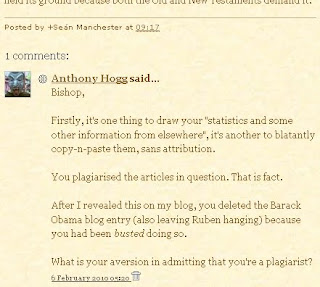