David continues his shameless deception and hucksterism. Also, the recent stalking escapades he's condoned, have inspired a new blurb for this blog.
Yes, the great proponent of free speech has been (unsurprisingly) selective in publishing my comments on his blog. My response to one of his latest deceptive tirades is still "awaiting moderation." 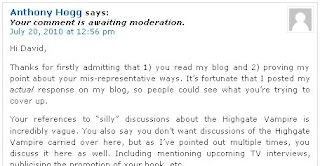 Meanwhile, he's allowed comments by regular commentator, "John Baldry's Cat" (JBC) concerning purchasing his latest book. Yes, despite saying "I do not use this Blog to advertise my books". Whatevs! As a result, JBC was left without context for what I actually wrote, instead relying on David's rhetoric.

I followed it up with a comment that David actually allowed, amazingly enough (maybe because of the coverage I've been giving the matter on my blog?), in which I set JBC straight. Yet, he still managed to censor it.

The missing name? Manchester. David frequently alludes to him, but clearly doesn't like using his actual name. So much for "naming names" and backing up his claims. Funnily enough, the Manchester crew likes hiding David's name on occasion, too. Note the reference to "The Devil's Fool" in this thread on The Cross and the Stake message board is actually Farrant. Yet another similarity of the opposing sides.

Now, back to the comments. Next up, Dave tries to dissuade JBC ordering a copy of the book on my behalf, encouraging me to buy my own copy. Yes, yet another sales pitch. He also discusses my lack of awareness of the book's contents: 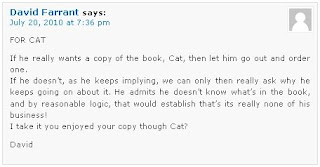 There's a pretty obvious reason why I don't know what's in the book. It'll become readily apparent. But first up, JBC's response:

Well, I'm gonna take his word on that one. He might be pesky, but I don't think he's that nutty. So it was a longshot. But it still leaves open the mystery of who my stalker was. Notice how conveniently that was brushed aside by Dave? Typical. Anyway, now it's time to reveal why my knowledge of the book is somewhat limited. Strap yourselves in, folks! 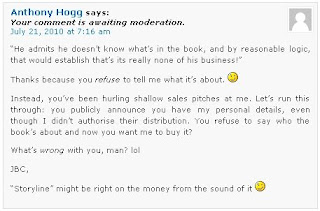 Yes, amazingly enough, in all the time Dave's been sales-pitching, he's refused to discuss what the damn thing's about! Do you buy books online without knowing anything about their contents? As I've pointed out before, the damn thing doesn't even have a product description on Amazon. Do authors usually spend this much time dodging questions concerning basic information covered in their book? Worst. Salesman. Ever.

*****************************
Lastly, I come to this blog's new blurb. In light of all the stalkyness that's been going on, I've been concerned that my readers might find themselves exposed to it, considering the nuttiness of the stalker in question. So, I've composed a new blurb for this blog, which'll hopefully give readers (the sane ones) a heads-up on what they might be getting into:

Felt like I needed something a bit more direct than my "Public Service Announcement". If you're a newbie, or never really paid attention, and you wanna see what the old blurb said, then you'll find it here.
Posted by Anthony Hogg at 2:19 PM