CPR for the Highgate Vampire

Despite David's ludicrous assertion that I'm the one keeping the "40-year old history" of the Highgate Vampire alive, as well as his continued association with it, it's good to see that an outside source recognises the truth. 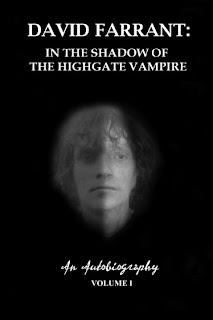 No, that pic's not a mock-up. Yeah, I know it looks like a bad Photoshop job, but it's actually the front cover of David's autobiography. And yep, he chose that title himself. But that's not the point of this blog entry. I want deal with the outside source mentioned. A source linked to in one of Dave's own blog entries.

As I said here, Dave gets a kick out of self-publicity. This means he couldn't help mentioning a review of his autobiography over at Mysterious Britain & Ireland. It's just a shame that the reviewer confirms David's link to the Highgate Vampire and his association with it, all outside of my say-so:

Illustrated by never seen before black and white photographs from the authors private collection, the aptly named ‘In the Shadow of the Highgate Vampire’ focus’s on the authors early life in Highgate, his introduction to Wicca, his travels in Europe and the events surrounding the aforementioned Highgate Vampire case for which his name will be forever entwined..

Thanks for sharing the link, Dave! Much appreciated. And cheers to you, too, Mr. Topham, for confirming what I've been saying all along.
Posted by Anthony Hogg at 3:45 PM