After I revealed the source of Bishop Manchester's plagiarised sermon (and confronted him about it), his blog post "mysteriously" disappeared.

It's certainly not the first time the Bishop's resorted to covering his tracks, rather than admit responsibility for his dubious actions. The great irony is that the recent deleted post concerned "truth" and "humility". And, of course, was pinched from somewhere else without due attribution. Classic.

*****************************
Meanwhile, his self-professed adversary, David Farrant, wound up publishing my comment (see previous post) concerning the lack of info available on his latest book. Of course, he couldn't resist accompanying it with a baseless warning. Anyway, here's his say on the matter: 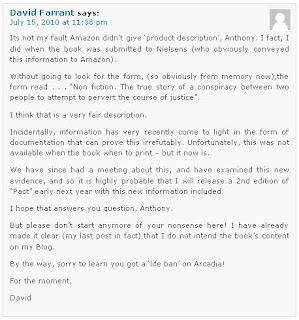 The good thing about his reply is that it confirms several things that I stated in "Pact with Self-Promotion".
After all that, he still failed to cough up further info and instead supplied more allusions. But I wasn't gonna let him off the hook that easily:

Try not to jump the gun, mate! I merely asked about the content of the book. I’m not blaming ya for there being no info on Amazon. I’m just saying there doesn’t seem to be much info on it anywhere, except vague allusions. For instance, who are the “two people” attempting to pervert the course of justice?

Why not name names if you’re evidence can back it up?

As to not wanting to discuss “Pact” on your blog, well, as I recently covered on mine, you’ve discussed it quite a bit as it is.

But this so-called "new evidence" and its inclusion in a second edition has got me thinking. And I decided to share my thoughts with Dave on his blog:

As regards to “Pact with the Devil”, I have no need to discuss the book. It has been officially listed with an ISBN; it is on Amazon and Nielsen records, and will very soon be lodged at the 6 major University Libraries i.e. Oxford, Cambridge, Wales, Ireland and Scotland, including, of course, the British Library.

Here's a fun fact: did you know it means (academically-speaking) sweet bugger-all to have one's work submitted to these places? Sure, it looks all fancy having your work lodged at 'em. Unless, of course, one's familiar with the concept of legal deposit, which is "a legal requirement that a person or group submit copies of their publications to a repository, usually a library."

Hell, I could write a book about being the reincarnation of a 19th century sea captain and submit it to those prestigious institutions, if I wanted to. And what would I get out of it? An assured copyright.

Oh, and the book has an ISBN. Wow, really? That essentially means that the book's got a "a unique numeric commercial book identifier based upon the 9-digit Standard Book Numbering (SBN) code". Big whoop. Self-publishing company, Lulu, can provide you with the same thing.

So, I'd like to take the time to thank my readers (and I know you're out there! My Feedjit tells me so) for their support. Even if it's just reading through or submitting vitriolic comments, it means my efforts aren't in vain. Cheers!
Posted by Anthony Hogg at 1:23 PM