We've had a peek at the views of Montague Summers and his "link" to Seán Manchester and the Vampire Research Society. Now we'll see what Augustin Calmet, and other notables within the Church, had to say about vampires. 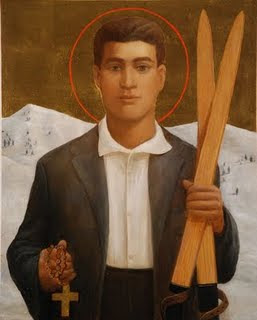 Few authors, apart from Summers himself, are so closely associated with vampire studies than French Benedictine monk, Augustin Calmet (1672-1757). Renown for his Biblical exegesis, highly regarded as a scholar, yet he came under heavy fire from Voltaire and other eighteenth century philosophers for giving serious coverage to vampiristic phenomena.

Massimo Introvigne (b. 1955), the Italian director of the Transylvanian Society of Dracula and staunch Catholic, is assured that despite the cautious approach Calmet used in his books, he was far from a believer:

Personally, I would argue that Calmet did not really believe in the existence of vampires even in 1746, even if he was still undecided, and his writing style might have easily misled his readers. Many of his chapters include length quotations from other authors, manuscripts, anonymous works, newspapers and journals, without any comment. The work was, more than anything else, an anthology of contradictory statements, which should by no means be regarded as representing Calmet's own opinions ("Father" 606).

Selectively (and deceptively) representing one's source is a tactic the VRS uses in its "Vampirological Testimony", as we saw in Part 2 of this series. They even manage confuse the title of Calmet's first edition with its last (Fig. 1):

Fig. 1 The VRS incorrectly cites Calmet's 1746 book.
So what did Calmet actually have to say on the matter? Fortunately, for those of us who can't read French, Calmet's work has been published in English. The third edition, Traité, was translated by Rev. Henry Christmas and re-titled The Phantom World: or, The Philosophy of Spirits, Apparitions, & c. (London: Richard Bentley, 1850) in two volumes. Thanks to Google Books, you can read and download both of 'em online (See: Vol. I; Vol. II). The second volume's the one concerned with vampires. Calmet's views on the matter don't get any more clearer than this:

That the oupires, or vampires, or revenans of Moravia, Hungary, Poland, &c., of which such extraordinary things are related, so detailed, so circumstantial, invested with all the necessary formalities to make them believed, and to prove them even judicially before judges, and at the most exact and severe tribunals; that all which is said of their return to life; of their apparition, and the confusion which they cause in the towns and country places; of their killing people by sucking their blood, or in making a sign to them to follow them; that all those things are mere illusions, and the consequence of a heated and prejudiced imagination. They cannot cite any witness who is sensible, grave and unprejudiced, who can testify that he has seen, touched, interrogated these ghosts, who can affirm the reality of their return, and of the effects which are attributed to them.
I shall not deny that some persons may have died of fright, imagining that their near relatives called them to the tomb; that others have thought they heard some one rap at their doors, worry them, disturb them, in a word, occasion them mortal maladies; and that these persons judicially interrogated, have replied that they had seen and heard what their panic-struck imagination had represented to them. But I require unprejudiced witnesses, free from terror and disinterested, quite calm, who can affirm upon serious reflection, that they have seen, heard, and interrogated these vampires, and who have been the witnesses of their operations ; and I am persuaded that no such witness will be found (II: 240-1).

Testimony indeed. So how about other Church authorities not listed on the VRS page? Did any uphold belief in vampires? Let's go with Giuseppe Davanzati, another popularly cited eighteenth century Catholic authority. He's best-known for Dissertazione sopra i vampiri (1774; 1789). Here's what Introvigne has to say about his work:

Discussions between Cardinal Schrattembach, Bishop of Olmutz (a believer), and Monsignor Giuseppe Davanzati (1665-1755), Archbishop of Trani and later Cardinal (a skeptic), also led the latter to prepare between 1738-43 a report that, as we shall see, went on to play a crucial role in persuading the Vatican to condemn any, and all, belief in vampires as superstition ("Father" 600).

Yeah, that's right. The Vatican. Just in case it's not clear how significant this condemnation is, let me remind you of the authorial role it has in the Catholic Church:

The Holy See (Latin: Sancta Sedes) is the episcopal jurisdiction of the Catholic Church in Rome, in which its Bishop is commonly known as the Pope. It is the preeminent episcopal see of the Catholic Church, forming the central government of the Church. As such, diplomatically, and in other spheres the Holy See acts and speaks for the whole Catholic Church. It is also recognized by other subjects of international law as a sovereign entity, headed by the Pope, with which diplomatic relations can be maintained.

And speaking of Popes:

By 1749, Rome had also spoken. In 1740, Prospero Lambertini became Pope and took the namre of Benedict XIV; he was regarded as a specialist of apparitions and other supernatural occurences without parallel in the history of the church. His book on the subject is still quoted and used by the Catholic Church in the 20th century when allegedly supernatural events occur. In the first edition of his book, published in 1734, Lambertini did not deal with vampires. In the second edition, however, published in 1749 in Rome after he had become Pope Benedict XIV, he added two pages on vampires, pronouncing them to be "fallacious fictions of human fantasy". He followed this with an apostolic letter to the Archbishop of Leopolis urging him to vigorously "suppress this superstition [of vampires]". "Tracing the source of it you may easily discover that there are priests promoting these stories in order to persuade the gullible populace to pay good money for exorcisms and Masses" ("Father" 608).

So, despite Manchester's insistence that the "Catholic Church has always accepted the existence of such things and the need to deal with them by way of exorcism", I'm yet to see any convincing proof to back this claim. The VRS's "Vampirological Testimony" is useless in this regard.

As you've seen, major Catholic authorities, even a Pope, have condemned belief in vampires as "superstition". The small circle of believers that Manchester does cite are partial to the VRS, or, in Summers' case, of dubious connection to the Church itself.

What are we to make of Manchester's claim? Without further proof, without further citations indicating the widespread belief he alleges, I think we can borrow Benedict XIV's words and mark Manchester's statement as the "fallacious fictions of human fantasy".
Posted by Anthony Hogg at 1:34 PM