I've touched on certain similarities between the opposing figureheads of the Highgate Vampire Case and their sympathisers. I've also confronted David about his hucksterism. But another parallel can be drawn there, too. 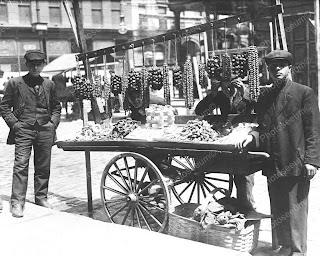 Dave's not the only one with a tendency to hawk his wares online. An Unexplained Mysteries forum member named Sno shared his thoughts on the Highgate Vampire Case in the wake of posts made by fellow member, VampireResearchSociety. Here's what he had to say:

IMO it sounds like a group of people got together and made up this story about The Highgate Vampire and copyrighted the material so you would have to buy the book to learn their "truth". Every time VRS is asked to show proof we are referred to the book, hmmm pay us for the information that only we have, I’m not thinking so.

If there was such an event happening wouldn't more than just a select group of people be able to get some information about it? There are accounts from people who have lived near there that have stated that the only things happening in the cemetery were some Satanists/Occultists hanging out. Maybe the people “performing” the exorcisms were the Satanists/Occultists?

All in all, this entire thing sounds fishy.

It's good to know that despite the hostility evinced by the opposing sides towards each other, that they resort to similar methods to get their "message" across. It proves that they have something in common, after all.
Posted by Anthony Hogg at 4:16 AM