Once again, Dave tries to give the runaround. When I confronted him about being a stalker, asking him where he'd gotten certain personal info on myself, he came up with a decidedly weak reply. 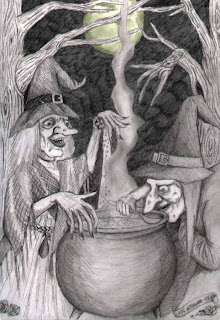 I guess I should've known better than to expect a straight answer from Runaround Dave. But when you tell someone else you have their home address (even though you haven't given it to them), you could at least reveal the source, to prevent further leaks. Here's what Dave told me, instead:

Elementary my dear Watson. You seem to forget that us ‘witches’ are endowed with supernatural powers!

But don’t worry, we also have a great sense of honour and don’t betray confidences!

A pretty bogus reply by all regards. Of course, I wasn't gonna let him get off the hook that easily, so here's my response:

Well, Dave, if you had any sense of honour, why would you have my address to begin with?

Especially as I didn’t hand it over to you or anyone you know. Neither have I published it anywhere.

I mean, seriously. Why on earth would Dave have my address? What use does it have to him? Not like I'm gonna be ordering any of his merchandise anytime soon. Does it mean I'll have to resort to digging up his home address? Once again, I'll keep ya posted.
Posted by Anthony Hogg at 10:57 AM