An Overhaul and a Manifesto

After mucking about with my other blog's layout, I decided to do the same for this one, too, to make it look a bit more spiffy.
It's certainly been a while since I've done so. Here's what it looked like until today: 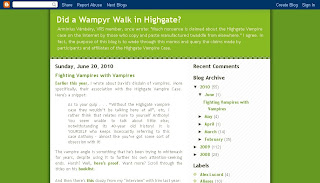 I also did something I've been avoiding for a long time: I've linked each of my blogs to the other. There's a clearcut reason for why I haven't done so till now.

As I mentioned in "Public Service Announcement", discussing the Highgate Vampire can attract unwanted attention. The allusion, of course, was to VRS and HVS associates and affiliates. Here's an example of the kind of idiocy I've had to deal with.

So, I've been keeping both worlds separate, as I see my vampires studies as (for want of a better term) more serious, albeit entertaining, than my forays into the Highgate Vampire Case, which is sort of a sideline hobby.

How can I label "vampire studies" as "serious" over the Highgate Vampire, when both involve dealing with the undead? Simple. I know vampires aren't real. I enjoy reading about them in a fictional or folkloric context. The Highgate Vampire Case is presented as a real event by its main participants (even if it's occasionally revised to be a "psychic entity"), but, quite frankly, there's just too much hokum involved in it to make it believable in any sense.

Its main promoters, Dave and Sean, and their "fans", have done little to dispel this notion, as attested during the course of this blog's existence and frequent exposés. Nonetheless, they take it seriously enough (probably cos it's pretty much the oxygen that keeps their fame alive and helps generate an income for 'em) to engage in some rather dubious practices. That's why I wrote the "Public Service Announcement" in the first place.

But, y'know what? I'm proud of the work I've done for this blog. I shouldn't have to keep it "hidden". I think it should be read by more people. Despite my stance on the matter, I don't begrudge those who do believe something spooky went down in the Cemetery. That's their choice to make. They don't have to agree with what I write and I'm certainly open to discussions on the matter. I've been doing so over at my Facebook group, which you're free to join.

On my part, I've made no money off my endeavors, nor do I intend to. The information I share is freely accessible. That's because most of it's online. Whether you consider that to be a legitimate resource should be buoyed by the fact that a lot of the writings in question are primary sources. That's right: stuff right out of the mouths (keyboards, really) of VRS and HVS presidents, founders, associates and fans.

But in doing so, it means I've had to put up with a lotta crap. In fact, at various intervals, I've been accused of being on either side of the party. Neutrality is not something generally appreciated in this Case. It seems you gotta bat for one team or the other.

I think that's a preposterous expectation.

Especially considering that we're dealing with a Case that involves bloodsucking undead corpses and disembodied psychic entities sapping away at your lifeforce. Depending on who you ask. It's even been able to generate a feud (and revenue) that has been going on for about 40 years (the Case went public in 1970, after all).

The main parties presenting their claims are clearly as dodgy as the other. My advice to people who express doubt for both sides, but still find themselves siding with one over the other, is that's it's like picking the lesser of two snakeoil salesmen: why would you choose either one?

Again, as harsh that might sound, I'll emphasise again, that I'm still open to discussions on the topic. I can't not make you believe in the Highgate Vampire (or Entity). That's up to you. I only ask that you be open-minded enough to consider the evidence on hand and to share your own thoughts and views on the subject. Who knows what we might learn.
Posted by Anthony Hogg at 4:21 PM