Remember when I mentioned the revenue the feud generates between the main parties associated with the Highgate Vampire Case? Here's an example of what I'm talking about.
David's got a new self-published book out called Pact with the Devil. It was released on June 23rd and he's been banging on about it so much, that even he acknowledges that he should give it a rest:

Suppose I’d better do another Blog as the last one is five days old now. Nothing much to say though really, I don’t want to just keep talking about my books.

But, much like his love/hate relationship with vampires, he can't quite bring himself to stop:

Only that the 2nd Vol of my autobiography is well on schedule for October, and, as you know, “Pact with the Devil” has been completed and is now on sale.

He also touches on the revenue angle I've mentioned when he says, "I’m surprised really about the success of that (but pleasantly as I’ve now had quite a few cheques back!)."

Really? Surprised? Surprised at what? That his frequent self-promotion actually paid off? Not like he hasn't engaged in it before. Anyhoo, here's a list of his blog entries that mention the book. Note that some of them even contain self-cross-promotion to other contributions and publications:
I think you get the drift. And it hasn't just been confined to his blog, either:

To perhaps get away from the highly monotonous irrelevancies sometimes being posted here, just thought it might be relevant to announce that my new book “Pact with the Devil” (which deals with some of the Highgate ‘vampire’ case already referred to here) will be available soon on Amazon, and in most bookshops.

But the funny thing is, not much is said concerning what the book's specifically about. In "That's Why I Wrote It", he mentions that "It does not serve to redress the claims of ‘vampires’ (and other ‘vamp[ire enthusiasts’), just to set the record straight, that’s all."

His latest blog entry, "Suppose I'd Better . . ." (which I quoted from near the start of this entry) states

a lot of people were given a mass of mis-information on the Internet in 2007 (and since) and they want to know what really happened. I don’t intend to go into all the ‘ins and outs’ of the book here, except to say it only tells the truth about things that really happened.

These vague allusions are Dave's stock-in-trade. I mean, what mis-information? Also, if it was posted on the 'net, why didn't he address it there? He's got his blog and website to do so.

The book's Amazon listings aren't helpful either. They don't even have product descriptions (see: Amazon and Amazon.co.uk). However, they do reveal that the "book" is a mere 52 pages long and on sale for £5.95.

To clear up this mystery, I decided to ask David himself. Here's what I posted on "Suppose I'd Better . . .": 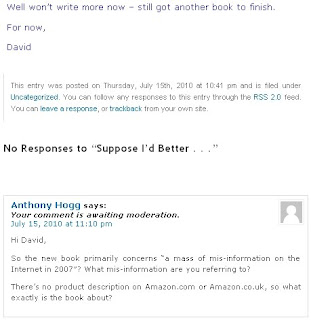 As a self-professed doyen of free speech, surely Dave'll take the time to answer my query. He wouldn't do something as silly as censor my comment, would he?

That remains to be seen.
Posted by Anthony Hogg at 6:11 AM