The Lighter Side of Being Stalked

Even though I established that Dave isn't a cult leader, he's still keen to bang on about the flimsy association on his blog. The rationale behind his defence is quite a joke, as you'll soon see. 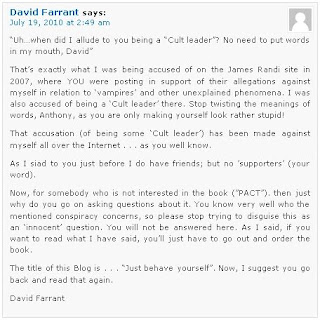 It's fortunate that I can see the funny side of being stalked. Especially when the comedy's inadvertently coming from Dave, courtesy of his limp-wristed blog responses. One of them even exploited his Wiccan background to cover the tracks of his stalker pal.

But, I haven't been praised for my "articulate, concise and relentless" approach to Highgate-related dealings for nothing, so I wasn't gonna let that one rest. Here's what I wrote back to Dave:

Re: cult leader stuff. Sure, others might have been saying such things about you on JREF, but I didn’t. So what’s your point?

Why raise their insinuations against my responses to you here? Why not just admit you didn’t know the definition of “sympathiser”, without resorting to such gobbledygook?

Speaking of which, let’s not forget that this mysterious “sympathiser”/friend of yours resorted to hacking (?) personal details about myself and forwarding them onto you for an undisclosed purpose. Do you find their actions justifiable?

Yes, I was posting stuff on the JREF forum in relation to yourself, vampires and unexplained phenomena. And? You forgot to mention that I was also quoting what you wrote about and what you’ve been recorded as saying on such matters? So, again, what’s your point?

You neglected to mention that you also wound up using the same forum (in collusion with “Cecil Lamont-Dwiggins”, another forum member) to a advertise a comic (published through BPOS) ridiculing myself and Sean Manchester, among others. Yet another feud-based revenue-raiser. I’m seeing the same pattern here.

Why do I ask questions about “Pact”? Because it seems to concern the Highgate Vampire Case. You know, the thing I write a blog about. Also remember that there’s precious little info on the book. Not even an Amazon description.

As to who it concerns, on that matter, I can only speculate. And I’d prefer not to do that. So, I’m simply obtaining such info straight from the horse’s mouth. Yes, you, its author.

I find it ludicrous that you’re promoting the book as a factual account, that you can back up what you say, etc. etc. yet you’re obviously too scared to even discuss who it largely concerns…on your own blog. And you accuse me of “silly innuendos”. What a laugh.

Whatever’s in the print account, you should be able to relate on here. What’s the problem? Asking questions about the book isn’t being “naughty” as you patronisingly infer.

Lastly, you say in the blog post that you “do not use this Blog to advertise my books”, yet you’ve thrown a sales pitch at me no less than four times in this comment section, alone.

And talk about audacity. It’s the same thread you’ve used to admit that you have my home address (which I didn’t give to you or anyone you know) and that you’re harbouring a stalker, as you refuse to disclose who forwarded my details onto you in the first place. Now you want me to buy your booklet? Gimme a break! Hahaha!

Like I said, it's good to see the funny side of such nonsense. That doesn't mean such actions should be tolerated, though. After all, how's it conductive to open discussions on the Highgate Vampire Case, when sympathisers resort to stalking the "enemies" of their friends? Such actions should be openly condemned by the main parties, not brushed off with weak excuses.
Posted by Anthony Hogg at 5:46 PM