Even though I've been referred to as an "obsessed scandal-seeker" by David, it's clear that he harbours such activities on his own blog. The latest example concerns Barbara Green.
It began with a simple request: "I tried the e-mail addy on your Robin Hood site a while ago, but it appears to be defunct. Do you have something more current?" She didn't respond, instead, posting a diatribe about a "mancurian biog–what was it called–oh I remember, Stray Wits."

Barbara often talks in riddles, but it's easy to decipher was this allusion meant. According to the Urban Dictionary, "mancurian" is defined as "someone from Manchester, or something related to Manchester." This is not a geographic reference, in context. It's a cryptic reference to the man she had a falling out with, some time ago: Sean Manchester.

And the "Stray Wits" reference? An obvious dig at Stray Ghosts, Manchester's unpublished memoir. Though, as you can see, it's not a blog as Green infers.

Thus, when David said "Nobody I know seems the least bit interested in yourself but just view you as an ‘obsessed scandal-seeker’: one you seeks to invent ‘scandal’ when in fact none really exists", we really have to wonder about the activities taking place on his blog. In fact, shortly after I pointed out the following - "As to seeking scandal, you should see what happened when I tried to ask Barbara Green, one of his associates, for her e-mail addy. Basic query, right? Well, it's not how she responded" - Barbara "coincidentally" posted a follow-up to her diatribe-response! 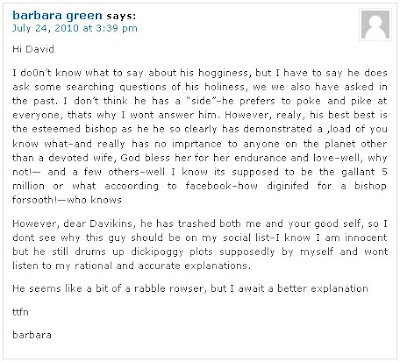 The "searching questions" I ask of "his holiness" is yet another reference to Manchester, as attested by the "esteemed bishop" reference. She's right in saying that I don't have a "side". I've made this clear, previously:

In fact, at various intervals, I've been accused of being on either side of the party. Neutrality is not something generally appreciated in this Case. It seems you gotta bat for one team or the other.

I think that's a preposterous expectation.

The main parties presenting their claims are clearly as dodgy as the other. My advice to people who express doubt for both sides, but still find themselves siding with one over the other, is that's it's like picking the lesser of two snakeoil salesmen: why would you choose either one?

Barbara's incorrect in saying that I won't listen to any of her "rational and accurate explanations". Hell, one of the reasons I wanted to contact her, was to request an interview for this blog. Y'know, to give her side of the story. It's an offer that still stands. 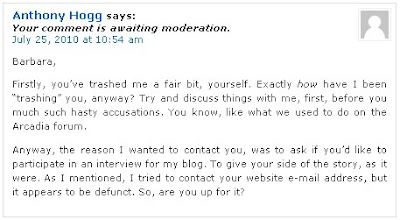