He publicly announced that he had my home address; even though I didn't give it to him, or anyone he knows. He tried claiming that he found it through supernatural means. But it turns out (surprise, surprise), that there was a far more mundane source. 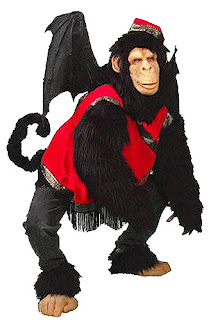 The ongoing stalker saga continues through David's blog. In the latest installment, Dave finally alludes to his actual source of personal info about myself. And once again, it's accompanied by a shameless sales pitch:

Is it just me, or is there some very faulty logic being applied in that response? Also, what "silly innuendos" and "vampire" stuff? As usual, Dave's rather oblique on the matter. Anyway, here's my response: 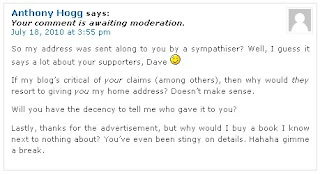 It's truly weird, though. I mean, why would they get so fired up about the stuff that I write concerning Dave, that they'd resort to tracking down my personal info and forwarding it along to him? What were they hoping to achieve? Can Dave truly be trusted with such info? And what about the anonymous nutter who tracked the info down in the first place? They're still under Dave's wing.

See, I wasn't kidding when I wrote that "Public Service Announcement" a while ago. Good to see it bearing fruit.
Posted by Anthony Hogg at 11:47 PM