The Cult of Dave?

Dave jumps the gun during discussions of the stalker saga, inadvertently drawing on cultish parallels I hadn't previously established. Did he make a Freudian slip? 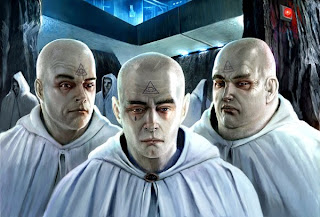 We've established that Dave keeps some decidedly shady company. Someone willing to source out my personal info and hand it over to him, even if their true motivation (and identity) remains a mystery.

Dave thinks they might've done it because I've "upset many people on the Internet" with "silly innuendos" and discussed his association with vampires. In other words, he suggests they've taken what I've said about him quite personally and gotten so worked up, they've resorted to such drastic measures without even talking to me first. Yeah, that makes sense.

Funny thing is, it's not the first time I've been the victim of such actions when it comes to discussing the Highgate Vampire Case online. Y'know, the distribution of personal info on behalf of a major participant I've somehow offended. But I'll get into that shortly. In the meantime, here's David's further response on the stalker issue. It also contains a rather strange insinuation I didn't attribute to him or his stalker buddy: 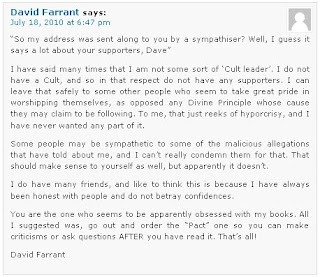 I was quite taken aback (and amused) by Dave's cult talk. Especially as I made no such inference. Obviously, he's not familiar with the meaning of "sympathiser". I addressed this in my reply and confronted him about his middling defense of the mystery stalker's actions. Oh, and did you see that sales pitch he slipped in? The guy really has no shame: 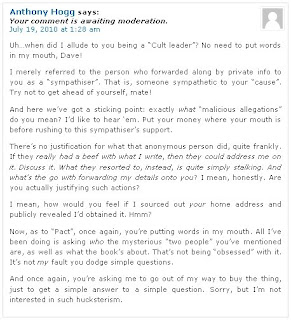 The "cult leader" thing's pretty funny when you consider that Dave's a former Wiccan High Priest, as his website's FAQ reveals. Another source claims he achieved a Third Degree rank.

That, in itself, isn't worthy of a parallel, but some things start adding up. For instance, it's pretty clear he doesn't like his word being questioned. He frequently sidesteps discussions with any modicum of depth concerning his own claims. But, hey, buy the books and you'll learn the "truth".

There's also the close-knit circle of "friends" on his blog. Ones that often echo what he writes about, heaping sly invective on his nemesis. His own devil, if you will.

And now we see the emergence of an anonymous "loyalist" rushing to defend his "honour" by digging up personal info on me and forwarding it along to him. Gee, I wonder what that reminds me of.

But the most amusing parallel of all, is something I was touching on earlier concerning my public forays into the Highgate Vampire Case and the unauthorised distribution of my personal info. Yeah, take a wild guess at who does the same kinda thing. Talk about strange bedfellows.
Posted by Anthony Hogg at 8:29 AM