Awaiting Moderation and Other Escapades

Captain Free Speech is at it again. Two of my comments are "awaiting moderation", yet, they've still managed to elicit one-sided replies.
I responded to Barbara's claims that I'd been "trashing" her and invited her to cite examples. I also extended an offer to her: would she be up for an interview for this blog? Y'know, so she could have her say on the Highgate hijinks and such. My comment is still pending publication, but here's her inadvertent (?) reply: 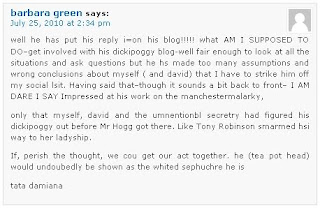 Firstly, it's nice to know she reads my blog (hi Barbara!). Second, the "reply" she's referring to is probably my "Tunnel Vision" post, in which I questioned her selective reading of my blog's content. That is, focusing on my criticisms of Manchester, while neglecting what I've uncovered about David's dodgy output. As you can see, she's gone and done it again ("manchestermalarky"). Nonetheless, my offer of an interview (if Barbara really feels like she's being misrepresented) still stands.

After Barbara's "social list" rant, Dave offers her comfort to her; suggesting that I should be ignored. It's not the first time he's tried to "silence" his associates. 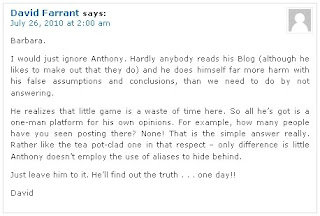 To be honest, I used to think "[h]ardly anybody" read my blog, too. The lack of feedback made me think I was just pissing in the wind. That is, until I installed Feedjit. Now, it's become very apparent that I do have readers and funnily enough, most of 'em come from the UK. Just like Dave. Sure, they don't post on here. But they don't need to, either. Point is, they're reading the thing and that's what counts.

But wait, how does David know that people rarely comment on here? Why, that could only mean he reads my blog! Hi Dave! Who needs tonnes of readers when I have an "esteemed" (ahem) psychic investigator reading my blog?

And what's this about doing myself "far more harm with [my] false assumptions and conclusions, than [he and Barb] do by not answering"? Surely, making generic, unsubstantiated claims about me without directly addressing what I say, only makes them look dodgy? As Dave points out, I put my name to my blog. That's my accountability. I frequently cite their writings. I link to 'em. If I say so-and-so is up to no good, then I'll give my reasons why. I'll show you. I trust the readers to make up their own minds from the conclusions they draw. Unfortunately, Dave doesn't share this ethic, as we'll see from his response to my other "awaiting moderation" comment. 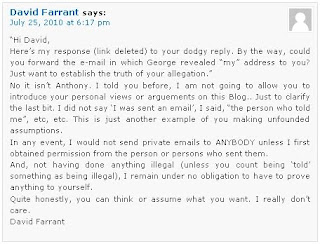 Talk about killing two birds with one stone. Not only did Dave quote from an unmoderated comment, but he even deleted the link I posted. In case you're wondering, it was this one.

It's pretty odd that Dave claims I'm introducing my "personal views and arguements [sic]", when I was directly addressing one of his claims. Basically, he told me (via his blog) that the person who sent him "my" home address, was an Arcadia forum member named "George". I asked him for proof. It's true that he never said he received the info by e-mail. But, as Dave and himself were/are both members of the same forum, it's a logical conclusion. I mean, what's the alternative route? They met up in a pub? George sent him a letter? How else would he have passed along the info to him? Dave's noticeably hesitant in revealing just how the stalker acquired "my" info. And why? Simply because I asked him for proof of his claim.

If Dave's that concerned about the stalker's privacy, why would Dave publicly reveal that he had my home address in the first place? Why would he subsequently reveal this mystery chap, to be a member of the Arcadia forum? What's to lose in sending me the e-mail (or other means) by which he received info about myself?

Let's find out, shall we? Here's my follow-up reply. It's presently "awaiting moderation":